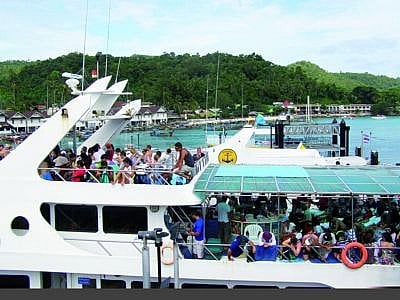 PHUKET: Despite regulations of the local village government stipulating that garbage not be placed out for collection before 8pm, trash continues to be dumped on Krabi’s Ao Nang Beach in broad daylight. Tourists say they don’t like it.

The stink and the unsightly mess are a source of harsh complaints not only from tourists, but also from local residents.

The continuing problem comes on the heels of a shocking report from the Phuket regional office of the Tourism Authority of Thailand (TAT) that 30 per cent of the visitors to Ao Nang Village say they will not return because of the filth.

Not only is the local government rule not enforced, but some beachfront businesses are dumping their garbage in front of other properties away from the beach, residents say.

One long term resident of Ao Nang, an expatriate, told the Phuket Gazette that unless something is done soon, the next TAT survey could well indicate that 75 percent of the tourists will not be returning to this once pristine resort community.