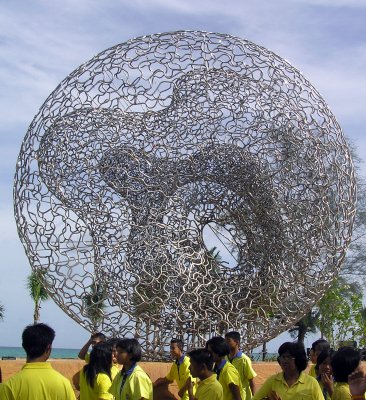 Kamala was one of the two towns in Phuket worst hit by the December 26, 2004, tsunami, the other being Patong.

The memorial, which forms the centerpiece of a new park in the town, is a 10-meter-high metal sculpture called Jitt Jakawan (Heart of the Universe), designed and built by Thai sculptor Udon Jiraksa.

In a speech to mark the occasion, CDPM Suwat said, “This tsunami memorial will become an icon for the Andaman Sea region, and is certain to become a tourism attraction in the near future.

“We need to establish more cultural sites to promote tourism. The Cabinet has already approved a budget of about 600 million baht to build the biggest tsunami memorial in the area [in Khao Lak]. That will be completed in two years,” he said.