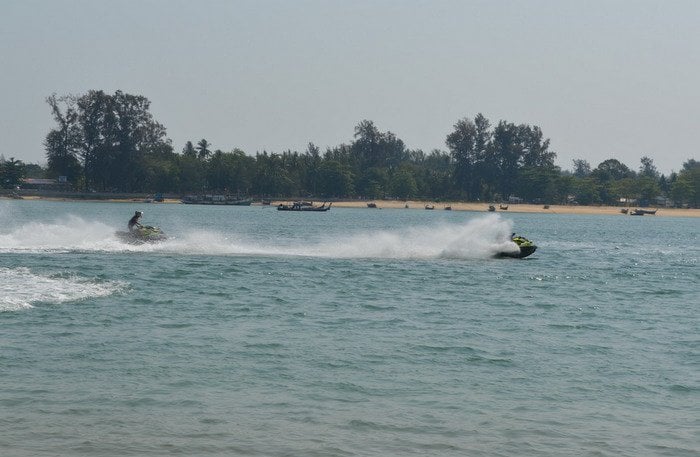 “We will be implementing the same zones as last year to separate jet-skis and swimmers to ensure everyone’s safety,” Governor Nisit said. “I am aware that a lot of people do not want jet-skis on our beaches, as they have caused many issues in the past. However, some tourists still expect to be able to partake in this extreme sport while on holiday in Phuket.”

Tourists’ desire to engage in the marine activity has long been touted as the reason to have jet-skis. However, a poll that ran for four weeks earlier this year on the Phuket Gazette website saw a staggering 75% of all respondents – including tourists – vote that jet-skis have no place anywhere on any Phuket beach.

The poll, which received 6,362 votes, including nearly 3,000 tourists asked: ‘Should jet-ski operators be allowed to operate on Phuket’s beaches?’

Only 5% of the tourists who took part in the poll voted, ‘Yes, they provide an activity that many tourists enjoy’, while a further 18% called for better regulation.

Like the tourists, the majority of Thai nationals and local expats called for an outright ban on all jet-skis in Phuket, with 73% and 76% of votes cast respectively by the groups (story here).

Limited action has been taken against jet-ski operators as a whole despite one Russian tourist dying in a jet-skiing accident and a number of other dangerous encounters at Patong, Nai Harn and Surin Beach last year (story here).

“Additionally, the number of jet-skis in the province will remain capped at 286. However, we will take action against any operators who repeatedly fail to follow the rules and regulations,” Mr Natchapong said.

“This high season, each local government body is responsible for putting out buoys to mark jet-ski and swimming zones for tourists.”

Historically, a lack of budget for these buoy lines has been cited as an issue. However, Mr Natchapong assured that budgets for the lines would not be a problem this year.

Hundreds to “Bike for Governor’