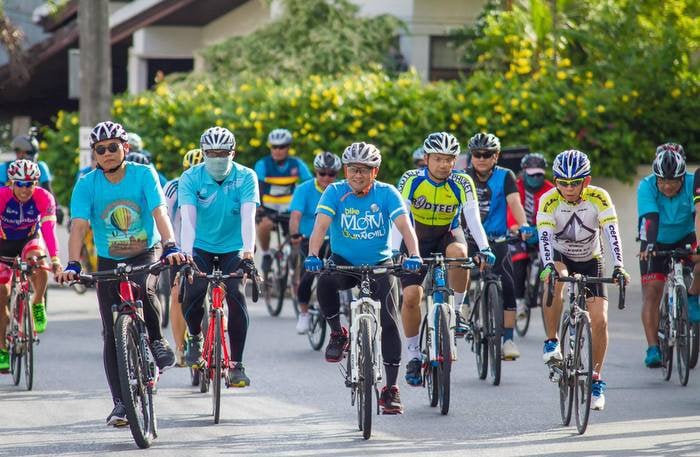 PHUKET: About 200 cyclists will mount their bicycles to bid farewell to Phuket Governor Nisit Jansomwong tomorrow.

The idea of the ride was tabled by Rawai Mayor Aroon Solos, who enjoys cycling and joined the national ‘Bike For Mom’ event in honor of HM Queen Sirikit’s 83rd birthday in August. The national cycling event broke the Guinness world record for the largest number of cyclists riding at the same time (story here).

The Bike for Mom event saw over 4,500 cyclists take to the streets of Phuket to honor HM Queen Sirikit’s birthday. Video: PGTV

“About 200 of us will gather at the Governor’s Residence early tomorrow morning. We will depart at 6am heading toward the airport and expect to get there at about 8am to see Governor Nisit off,” said Mr Aroon.

“The Governor will not join our ride, as he has to catch a flight at about 10am.”

Gov Nisit has been an advocate for cycling on the island during his time here, pushing for bike lanes throughout Phuket.

Recently, he received a budget of more than 50 million baht for the development of bike lanes along Bang Wad Reservoir and 10km of both sides of Sakdidet Road (story here).

“The Governor recently said that cycling events should be continuously held on the island. Therefore, I called people in the local government who like cycling and other people who might be interested and invited them to join us in wishing Gov Nisit luck in his new position,” Mr Aroon added.

Governor Nisit will leave Phuket to take up his new position as the governor of Nonthaburi.