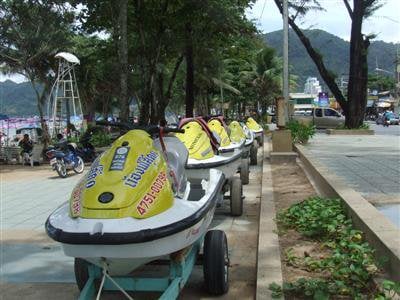 PATONG, PHUKET: A much-vaunted mandatory insurance scheme aimed at ending disputes between jet-ski operators and tourists in Phuket will be in place by November 16.

Kathu Police Superintendent Grissak Songmoonnark said the police have set up a committee of experts to adjudicate in disputes, deciding who should pay for any damage done to jet-skis.

The scheme has been up and running for a month-and-a-half, he said.

Whenever there is an accident or some damage found on a jet-ski, it is brought to the police box on the beach road.

Police make a report, then two or three members of the committee inspect the vehicle and talk to the parties involved, Col Grissak explained.

The committee members set a fair cost to fix the jet-ski, he said.

“Since we started the committee, there have been no problems,” he said.

Col Grissak said some foreign embassy officials, such as the Koreans and Australians, had thanked him for setting up the scheme.

By November 16, when all jet-skis will have to be insured, a variety of other measures would be in place, he said.

Aside from the committee, 12 officials from the Patong Jet-ski Association will be assigned to ensure jet-ski operators obey the rules and have the correct paperwork.

The three-and-a-half kilometers of Patong Beach will be divided into 12 zones, with each official assigned to one zone.

Colored pontoons will mark the zones.

A single jet-ski rental contract from Patong Municipality, written in English, Chinese, Japanese and Thai, will be used by all operators, Col Grissak said.

“About 120 of them are ready to be insured right away. The rest are having problems, such as the real owners’ names not appearing on documents.

“The owners of those jet-skis will have to go to the Marine Department to get the details right,” he said.

From November 16 onwards, any jet-ski not displaying an official sticker from the Ayudhya Insurance Company proving it has been insured will earn its owner a 10,000 baht fine.