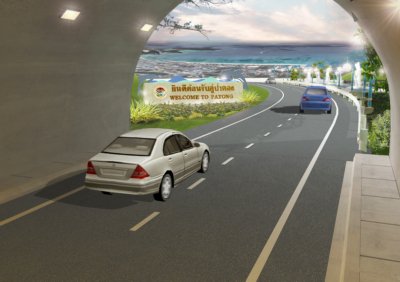 PHUKET CITY: The director of the consulting company undertaking a 40-million-baht feasibility study into construction of a tunnel to Patong has revealed more details about its initial findings.

Tanin Pongrujikorn, Director of Epsilon Co Ltd, told the Gazette, “Patong Municipality, which initiated the project, invited six Thai consulting companies registered with the Ministry of Finance and with relevant experience to submit proposals for the feasibility study services.

“Epsilon was one of those invited. We formed a group of consultants and submitted the [winning] proposal,” he said.

The field was initially narrowed down to two or three firms based on ‘technical best criteria’ presented, as judged by a review board.

The process was carried out under regulations issued by the Prime Minister’s Office in 1992 for procurement of private-sector contracts by government agencies, he said.

“GZ helped the group in preparing the technical proposal and is now reviewing the initial information for the next step, which is route selection,” he said.

Epsilon and GZ will together do about 60% of the study work, scheduled for completion in October 2010.

Choosing the best possible route among the three under study is now the main focus of the team’s work.

Mr Tanin said the project had to minimize both environmental impact and cost. “Of course the construction cost is directly related to engineering design and construction techniques,” he said.

Preliminary cost estimates for the construction range from about 1.2 billion baht for a two-lane tunnel route to about 2.4 billion for a four-lane option.

“At this stage we are collecting secondary geological information from reliable sources…We are now performing visual site investigation. After the route selection is completed, subsoil investigation and rock drilling will be performed on the selected route.”

For economic reasons, drill-and-blast methods would most likely be used to bore the tunnel, though this has yet to be confirmed by experts, he said.

The study team will also consider how all three options would affect views.

“Our environmental team will consider and evaluate the visual impact of each option and take into account information obtained from public hearings,” he said.

Aspects still under study include whether the route should be one-way, with return traffic over the existing road.

It has not yet been decided whether the road should be operated as a toll road to help finance construction, he said.