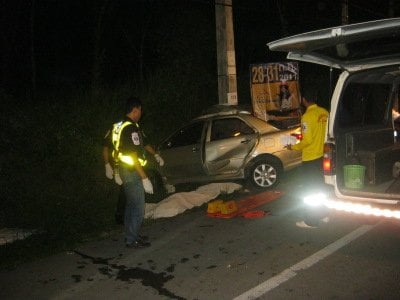 PHUKET: Police have confirmed that alcohol was not a factor in a fatal car accident in central Phuket on Friday.

Two other passengers were injured when the Toyota Vios hit a power pole while travelling from Patong toward Phuket Town on Wichit Songkhram Road near the Thai Naan restaurant and Central Festival.

A 25-year-old Kuwaiti man was not seriously injured and released from PIH on Saturday, while a 28-year-old Russian woman who was seated behind the driver is still in Vachira Phuket Hospital with two broken legs, hospital officials said.

Capt Kittiphum said that Ms Rabo had not been drinking but was driving at a high speed along a slightly downhill section of the road. When she reached a set of orange “traffic poles” marking a U-turn area, she swerved, causing the car to spin before slamming into the power pole, he said.

Ms Rabo’s body is at Vachira Hospital and Mr Alostad’s is at Phuket International Hospital.