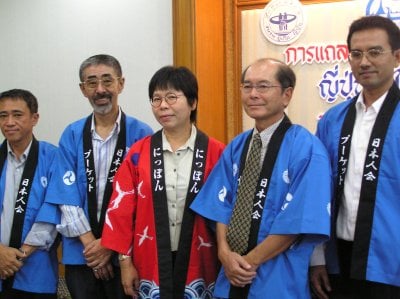 PHUKET CITY: The number of Japanese tourists visiting Phuket is recovering – albeit slowly because of misperceptions and feelings of guilt about visiting the tsunami disaster region.

Now, to give the island’s image a boost in Japan, a “Japanese Love Thais” festival is to be held June 25 at the Royal Phuket City Hotel.

Phuket Japanese Association President Kazushi Miyashita said the March Japanese arrivals figure of 5,000 was only about 30% of last year’s figures for the same month.

While low, however, the figure is still an improvement on the almost complete disappearance of visitors from Japan in the months immediately following the tsunami.

“I think the reason that more people aren’t visiting Phuket is encapsulated in a Japanese saying: ‘When people die, we stay home and mourn the dead,'” he explained.

He added that he hoped the one-day festival would help convince Japanese people that there is no longer any reason to feel guilty about coming to Phuket.

The event will feature traditional shows, games and even a chance for women to have themselves photographed wearing kimonos.

Part of the proceeds will go to charity, he added.

Mr Miyashita said that with the lack of Japanese tourists, about half of the 100 or so Japanese-run businesses on the island have had to close. These include Japanese restaurants, tour agencies, dive companies and language schools.

“Much of the recovery is due to word-of-mouth reports that it is safe to travel here,” he said, adding that future events to be staged by the Phuket Japanese Association might include inviting Japanese tsunami experts to come here and share their knowledge with the people of Phuket.

Suwalai Pinpradab, Director of the Tourism Authority of Thailand’s (TAT) Region 4 office in Phuket, said the TAT would soon conduct a road show to Sapporo, Sendai, Hiroshima and Nagoya to boost tourism from Japan.

While many airlines have curtailed flight service to Phuket, there are still three flights a week to Phuket from Osaka, she pointed out.

May sees decrease in road deaths