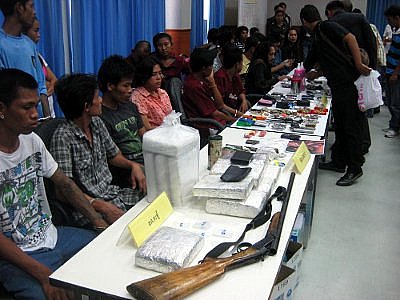 PHUKET: Phuket Town has maintained its place as the top district in upper Southern Thailand for drug crime, an accolade the popular tourist town has held for the past three years, a Bangkok health official was told yesterday.

The news was revealed at a meeting of the Phuket Provincial Anti-Drug Committee at Provincial Hall.

The meeting yesterday was held specifically to update visiting official Dr Boonruang Trairuangworawat, Deputy Director-General of the Department of Medical Services (DMS) in Bangkok, which plays an important role in the government’s nationwide crackdown on drugs.

From October 2010 to June 2011 there were 397 cases of drugs being seized in Phuket City, said Phuket policy and planning analyst Suriyan Dechraksa.

He explained that the statistics were compiled by the regional office of the Narcotics Control Board (NCB), which covers Nakhon Sri Thammarat, Surat Thani, Phuket, Krabi, Phang Nga, Ranong and Chumphon.

Koh Samui floated into third place with 229 cases, but fourth and fifth places landed back on Phuket with 147 cases in Kathu district and 146 in Thalang, he said.

Meanwhile, 109 cases of drugs being seized were recorded in Krabi Town, but only 103 were recorded on Koh Pha-ngan, the island off Koh Samui made notorious for its full moon parties.

However, the statistics showed a huge drop in the number of drug cases during the same period the previous year.

Despite the fall in the number of cases, Mr Suriyan said, “Phuket has been in First Place for drug seizures for the past three years and the problem seems to be growing.”

Maj Gen Pekad added, “Although the NCB statistics show a big decrease in the number of drug cases so far this year, if we compare month by month to last year’s statistic, the number of cases varies greatly. Some months we have many more than the year before.”