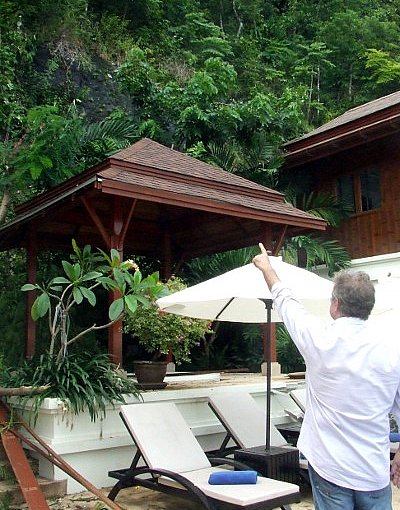 PHUKET: Heavy rains in Phuket over the past week have caused more boulders to hurtle downhill into the L’Orchidee Residences in Patong.

Although the boulders were smaller than the original two-tonne “devil’s marbles” that crashed into the resort at the beginning of this month, they have still caused damage and much concern, said Wassana Yukhunthon, the resort’s public relations manager.

“Right now we are still obtaining quotations to fix the original damage, which is likely to cost more than 200,000 baht, so we can hand that to our insurance company.

“These latest boulders, although smaller than the two-tonne rocks that crashed into the resort earlier this month, may well cost an extra 50,000 baht,” Ms Wassana said.

She explained that the smaller boulders were likely pinned against trees halfway down the hill from the construction site above. They may have become dislodged after heavy rains during the week, and started tumbling into the resort.

“We keep asking Prasert ‘O-pal’ Auksornprommarat, the construction foreman, to clear the rocks on the hill for us, but he always postpones it. The last time we spoke he said he would do it on Friday morning,” Ms Wassana said.

However, Thanachart “Aod” Pibuncharoenpol, who was hired by Opal to operate the backhoes at the construction site, told the Gazette yesterday, “My contract finished on July 26. Right now, if any rocks roll down the hill, it is not my responsibility. None of my backhoes are at the site anymore. The ones there are not mine.”

He added that much more construction needed to be done at the site, where a shrine for the Chinese goddess Guanyin is being built.

However, Mr Aod did accept responsibility for the boulders unleashed up until July 26.

“I accept responsibility only up until July 26, but no rocks at the site tumbled down the hill [after the original incident],” he insisted.

“I suggest the resort contact the current contractor working at the site or the owner of the project,” he said.

In the meantime, the resort is footing the bill for providing temporary accommodation for residents who have had to move out of their damaged bungalows, said Ms Wassana.

“For safety reasons, the owners of four houses, including two damaged by the boulders, need to stay in other houses on the property until the problem is resolved.

“We have to pay rent to the owners of those four houses for those guests to stay there,” she lamented.