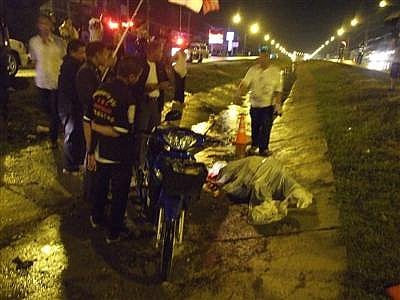 PHUKET: Phuket City Police are investigating the road death of a young mechanic whose body was found in the central drainage ditch of the bypass road early this morning.

Phuket City Police duty inspector Sien Kaewthong was informed of the body’s discovery at about 2am today.

Arriving at the scene, the median strip of the bypass road in Rassada, they found the body of 27-year-old Weera Choomsri, a native of Huay Yod District, Trang Province.

Mr Weera appeared to have died instantly of a broken neck and massive head trauma.

His body was pinned under the chassis of his badly damaged Honda motorcycle.

Police are unsure if Mr Weera accidentally lost control of the motorbike or collided with another vehicle.

They noted that the road was slippery from a recent rain shower.

There were no witnesses or other vehicles at the scene when police arrived.

Friends of the deceased said Mr Weera was returning home from a night out at a ‘songs for life’ pub in Kathu Municipality when the accident occurred.

Mr Weera was employed at the Isuzu Showroom on Thepkrasattri Road in Koh Kaew and lived in the workers’ accommodations there.

His body was taken to hospital by Kusoldharm Foundation workers for further examination and storage until it can be claimed by relatives.

In another accident earlier last night, three people were injured in a motorbike collision in Thalang.

The crash occurred at about 10pm on Soi Baan Riang, the access road to Thalang Victory Memorial Field, in Thepkrasattri subdistrict.

The third victim, Somkhit Mingphijarn, a 41-year-old from Thepkrasattri subdistrict, survived the crash with only minor injuries.

Thalang Police are still investigating the cause of the collision.