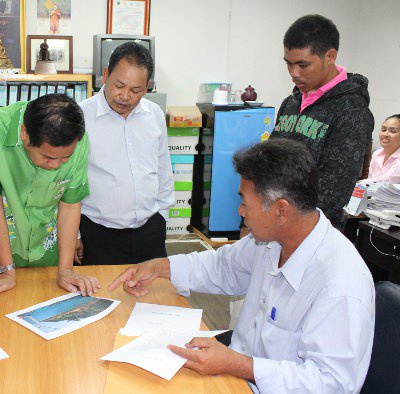 PHUKET: The head of a group of residents on Racha Yai Island, located about 25 kilometers south of Phuket, filed a complaint on Tuesday over alleged inaction by government officials in following up on publicly announced promises to take necessary steps in preserving the island’s natural environment.

Received by Prapan Kanprasang, chief of the Damrongtham Center (Ombudsman’s Office) at Phuket Provincial Hall, the complaint alleges that no action has been taken against resort owners for damaging the environment on Koh Racha, a popular day-trip destination for snorkelers and scuba divers.

The complaint filed by Mr Sarit follows government officers – at a meeting in May headed by Phuket Vice Governor Sommai Prijasilpa – promising to take action against businesses operators on Koh Racha found to be damaging the environment.

Included in the complaint filed on Tuesday, however, was the allegation that one resort owner on Koh Racha Yai was clearing land and dumping loosened earth into the sea.

“Last week, Koh Racha Yai residents saw the workers at one resort clear a site and dump it into the sea. This can greatly affect the coral reefs and marine life in the area. We would like the authorities to urgently deal with this problem,” said Mr Sarit.

“Koh Racha Yai has abundant natural resources and has fascinating scenery. It is a great destinations for swimming, snorkeling, fishing and diving. Recently, however, one resort owner cut down many trees. We have to do our best to protect the island’s beauty and we have filed complaints to local authorities several times, but we have been ignored,” he added.

“We would like the governor to assign officers from Rawai Municipality and other relevant organizations to inspect the area and stop the ongoing dumping of earth into the sea and bring charges against those who are breaking the law,” Mr Sarit said.

“I will report the problem to the governor and discuss the matter with other relevant authorities, and I hope the problem is resolved as soon as possible,” Mr Prapan said.