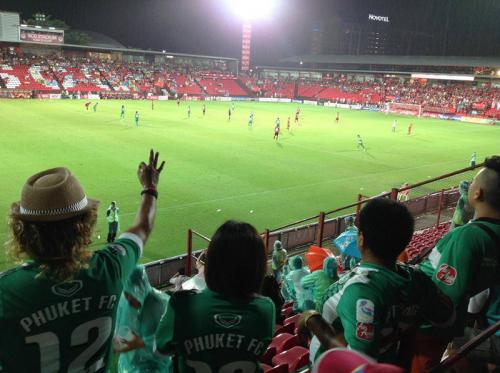 PHUKET: The Islanders Thai FA Cup dream came to an abrupt halt last night as they were knocked out 5-0 by current Thai Premier League champions Muang Thong United. The round 16 match was played north of Bangkok at Muang Thong’s 15,000 seat SCG Stadium.

The first half finished scoreless, but Mario Djurovski put the home team 1-0 up straight after the restart, when his shot was deflected into the net by a Phuket player. Another unfortunate Phuket FC player guided the ball into his own net to give Muang Thong a 2-0 lead. Fancy footwork by Thai forward Teerasil Dangda opened up space in the box for Edivaldo to calmly slot home from eight yards out to put Muang Thong three up. For Muang Thong’s fourth, Teerasil ran onto a through ball and chipped the ball over Phuket’s advancing keeper Ninruddin. Muang Thong scored a fifth when Pak Nom Chol rounded Ninruddin to score.

Phuket will have to pick themselves up ahead of their rescheduled Yamaha League 1 home game against second place PTT Rayong this Saturday, July 13, at Surakul Stadium. The game is goalless and only has 40 minutes left as the original match was canceled just after half time due to adverse weather conditions (see report here). A win for Phuket will move them up three places to fifth.

Kickoff is 5pm and admission is free.

Laguna Phuket Marathon to be still bigger and better next year