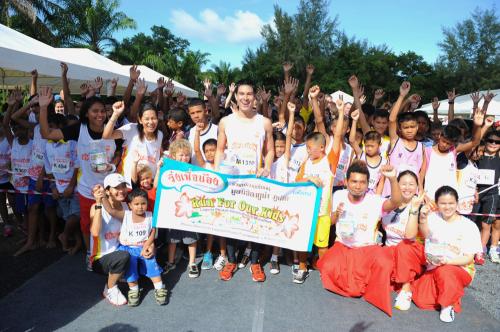 PHUKET: Now in its ninth year, the Laguna Phuket International Marathon (LPIM) is going from strength to strength with numbers of participants expected to break 6,000 next year including runners from Asia, Europe and the Americas.

LPIM is the largest destination marathon in Southeast Asia and sees participants push themselves to the limit in order to raise money for charity. Following the tsunami disaster in 2004, organizers Go Adventure Asia set out to create an event that celebrated how the people, businesses, and landscape of Thailand had recovered and were moving forward.

With over 5,300 entrants this year, the number of runners for the 2014 event is expected to break 6,000 and increase further in the years to come, supporting the government’s initiative of making Phuket the sports tourism destination of Thailand.

LPIM 2014 continues to build on the charitable success of the past marathons with runners encouraged to raise money for charity. Past events have supported local charities including: Laguna’s “Fully Booked!” Mobile Learning Centre, which aims to encourage students to read books and improve reading skills, as well as to give them access to learning resources that are currently not available to them; and the ‘Developing Sustainable Schools’ Program focusing on Baan Jao Krua School, Klong Kien Sub-District, Phang Nga Province. Laguna Phuket collaborated with the Population and Community Development Association (PDA) on this project in order to ensure successful development of this school.

For the eighth consecutive year, the sponsorship experts, Paul Poole (South East Asia) Co Ltd, will be representing the LPIM. The company is credited with securing partnerships with a number of high profile sponsors for the event, including title sponsor Laguna Phuket, which sees the race begin and end at its magnificent resort, a holiday complex of deluxe hotels and villas spanning 1,000 acres of tropical parkland along an eight kilometer stretch of pristine beach.

With a number of branding, media, hospitality and experiential marketing opportunities, rights are available for just one presenting sponsor, up to six non-competing co-sponsors, up to ten official partners and up to ten media partners.

There are also ‘Island Partner’ opportunities available for local Phuket businesses. A package of comprehensive commercial sponsorship and partnership programs has been created by Paul Poole (South East Asia) for the Laguna Phuket International Marathon 2014. The packages suit differing needs and enable international and domestic companies the chance to integrate their marketing initiatives with a sports event that sees participants push themselves to the limit for a great cause.

The Phuket Gazette has been a proud sponsor of the LPIM since its inaugural event close to a decade ago.