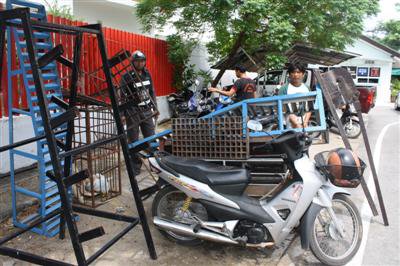 Assuming the covers had been stolen, they began a search for the culprit.

Police spotted Mr Amnaj with part of his haul on Soi Anusorn in Chalong the following morning.

He fled the scene in his salaeng (motorbike with sidecar), but was soon apprehended near the entrance of Land & House residential estate on Chao Fa West road in Chalong.

Mr Amnaj confessed to snatching iron and loading up his salang in overnight raids.

He sold the items to a scrap dealer in Rassada for seven baht per kilogram.

A painter by trade, Mr Amnaj told police he was three months behind on motorbike payments and needed the money because he feared his bike would be repossessed.

Fortunately there have been no reports of accidents related to the thefts.

Foreigners in 25% of Phuket road accidents over Songkran