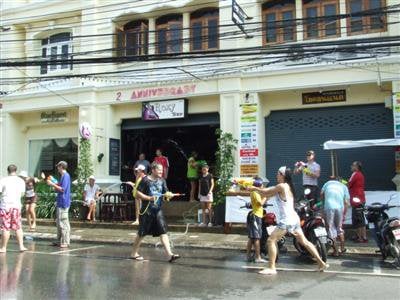 PHUKET TOWN: About one-quarter of the injuries recorded in Phuket during the recent Songkran ‘Seven Days of Danger’ holiday road safety campaign were foreigners, according to official statistics.

Figures released by the Phuket Disaster Prevention and Mitigation Office (DDPM-Phuket) show 60 reported accidents resulting in two deaths in the province from April 12 to 18.

Of the total number of accidents, about 25% were listed as involving foreigners.

As in previous years, the majority of accidents involved motorcycles, drunk driving and speeding.

Police manning checkpoints inspected 70,831 vehicles over the period, with 5,908 people arrested or fined.

The most common violation was driving without a license (3,120 cases). Next was riding a motorcycle without a helmet (2,012 cases), followed by riding in the front seat of a car without using a safety belt (348 cases) and operating a non-roadworthy vehicle (126 cases).