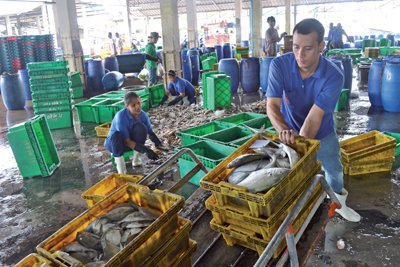 PHUKET: Minimum wage rises may not have a major impact on the wholesale price of seafood, which will continue to fluctuate due to a number of economic and seasonal factors, Phuket fishery industry representatives have said.

Wiroj Wasinwasukul, the manager of the Por Pichai Fishing Port in Rassada, was insistent that wholesale seafood prices will not rise specifically because of wage hikes.

“The fluctuation in seafood prices does not directly depend on [fishermen] wages, but is related to the quantity of marine life caught in addition to the demand by customers,” he said.

Representing an increase of at least 40 per cent from current wages, the new daily rate of 300 baht is set to be launched across all sectors in Phuket and the Bangkok metropolitan area starting in the first half of next year.

“At the fishing port, buyers and sellers are the ones who determine prices, which depend on the satisfaction between the two parties bidding,” Wirot said.

“For example, I want to sell a type of seafood at 50 baht per kilogram, but you want it at 45 baht per kilogram. Then, I negotiate the price to be 48 baht per kilogram. If you are okay with it, then I am okay to sell. The seafood price is immediate. It is not like pork or chicken prices, where there are current going rates which are posted,” Mr Wiroj explained.

The price of seafood is unpredictable and depends on demand and supply, he emphasized.

“For example, if a type of crab is in high demand, the price of it will rise automatically. Or if there is a high supply of a particular fish in the market, the price will go down.

Sometimes, that fish cannot be sold at all, even if days before it was in high demand,” Mr Wiroj said.

If wage rises were to cause seafood prices to rise, it would happen at markets and restaurants, he said.

“Most customers coming to the port are vendors who sell seafood at markets. Some customers supply restaurants while there are also representatives from restaurants who buy from the port directly,” he said.

Anan Taebunyanuphap, managing director of Phuket Union Foods Co Ltd, a major seafood wholesaler that supplies fresh and frozen seafood to over 100 hotels and restaurants in Phuket, also thinks the wage increase will have minimal impact on wholesale prices.

“Hotels also haggle the prices when buying from us or other suppliers – the same way as at the fishing ports.

“Prices of the same seafood will vary day by day depending on the demand. In the high season, the price will rise automatically… the higher numbers of tourists means a greater demand for seafood,” Mr Anan explained.

Vasan Tongsanga, president of the Food and Beverage Managers Club (Andaman region) and also the manager of the Serene Resort in Kata, echoed the notion, adding that weather was another factor affecting supplies.

“The seafood price always changes – especially during the rainy season when marine life is harder to find, thus resulting in more expensive seafood,” he said.

However, not everyone along the seafood supply line believes that prices will be immune from wage increases.

Somyos Wongbunyakul, president of the Phuket Fishing Association, said that the rise of minimum wages will have a huge impact on the fishing industry, including seafood prices.

“Apart from the minimum wage, [overhead] costs in the fishery business also include the oil price in addition to the supply and demand for seafood,” said Mr Somyos.

“Currently, the daily wage of Burmese workers in the fishing industry of Phuket is about 200 baht. We also provide accommodation and food,” he added.

Mr Somyos said that the industry is now suffering a shortage of Burmese workers.

They have been gradually leaving fishing jobs to work in the construction and rubber plantation sectors, he said.

“Recruitment [for low-wage labor] now is very competitive . Employers in those industries pay higher wages than us. Normally, the workers in the construction sector are paid about 250 baht per day. I heard that some skilled laborers are paid between 300 and 400 baht.

“If the daily minimum wage rises to 300 baht, it would be better to hire Thais since employers wouldn’t have to deal with the hassle of work permits,” Mr Somyos said.

“Some Burmese workers tend to leave their employers soon after getting a work permit. The employers not only lose the time and money invested for applications and extensions; they also have to recruit new workers – which are not easy to find,” he said.

However, Thai nationals may not want to work in this industry anymore since they are looking for higher salaries that require less work, he added.

Suttipong Saisakares, Chief of the Phuket Provincial Labor Office, told the Gazette that the minimum wage must cover both Thai and foreign nationals.

“Every time minimum wage rises are enforced, it has applied to alien workers… any person coming to Thailand falls under Thai law,” he said.

“So, when the law [about minimum wage rise] comes into effect, we’ll have to see again if the law comes with special conditions, but normally the minimum wage laws are applied to every worker – Thai, Burmese and other aliens,” he added.