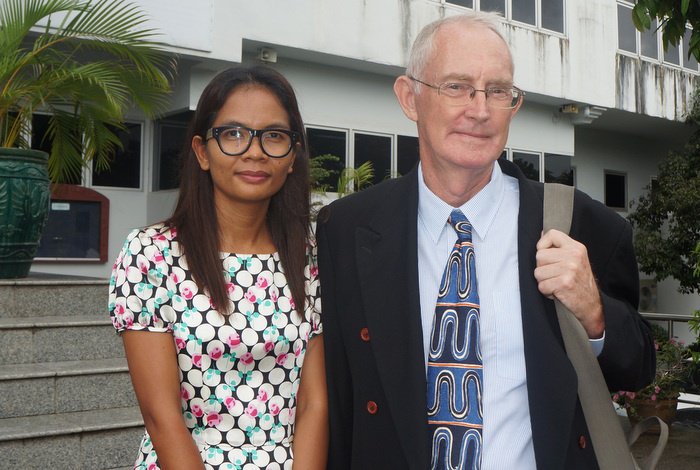 PHUKET: Members of the international media, including Reporters Without Borders, crammed into the Phuket courthouse today as the trial of Alan Morison and Chutima Sidasathian, of local news blog PhuketWan, began.

The suspects, as well as Big Island Media (PhuketWan), face charges of criminal defamation and violations of the Computer Crimes Act.

The four prosecution witnesses that gave their testimony today were: Capt Pallop Komalodaka of the Royal Thai Navy, who was authorized to file the complaint to police against the suspects; Lt Col Sanich Nookong of the Wichit Police; Capt Anurak Klanarong, who was with the Wichit Police at the time of the case, but has since been transferred to the Chalong Police; and an expert on the Computer Crimes Act from Bangkok.

According to the court hearing, the charges stem from a report published on July 17, 2013, which contained excerpts from a Reuters Special Report alleging that some Thai naval security forces worked with human smugglers to profit from the exodus.

In April last year, Alan Morison and Chutima Sidasathian of PhuketWan were charged for the report and released on bail (story here).

“The report unfairly damaged the Navy’s reputation, as the story published says that Navy officers accepted 2,000 baht per Rohingya as part of a human-trafficking network,” Capt Pallop told the Phuket Gazette following the first session today.

“The Navy has been very willing from early on to drop the defamation case against them, if they would simply apologize for the report.

“We’ve negotiated with them several times already and have even had members of the human rights committee join. However, we were unable to reach an agreement.”

Capt Pallop explained to the Gazette that he had no expectations about the outcome of the case, as it is entirely up to the judges.

“It is now in the court’s hands. I believe the court will deal with both parties fairly.”

Ms Chutima told the Gazette that she was also certain the court would deal with the case fairly. However, she was shocked when she was originally charged.

“It took me about 15 minutes to put myself together. Eventually, we sent a letter to Office of National Human Rights of Thailand and Law Reform Commission of Thailand calling for help,” said Ms Chutima.

“We have been in negotiations with the Navy. We sent letters explaining the exact circumstances to the Prime Minister, Ministry of Interior, Ministry of Foreign Affairs and Ministry of Justice.

“However, this was not what the Navy wanted from us, as they wanted a public apology for the story.”

Tomorrow, Ms Chutima and Mr Morison will testify, and on Thursday other experts for the defense will testify.

“It will take three days. One day for the prosecutor, and two for the defense. It is a very simple case, it will not take long,” Mr Morison said.