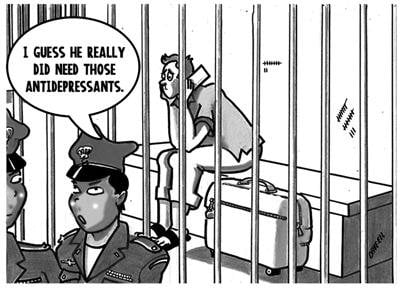 PHUKET: The arrest of a 17-year-old New Zealander for possession of diazepam without a prescription last month (see news pages) raises serious questions about the consistency of law enforcement in Phuket.

The facts of the case are pretty clear. The teenager admits to buying the pills. And he admits he had no prescription for them.

The Psychotropic Substances Act of 1974 makes it illegal to possess diazepam – and a whole host of other ‘Schedule IV’ drugs – without a doctor’s written permission.

The officers who arrested him were just doing their job. Right?

Well, when the case is viewed in isolation, the answer has to be ‘yes’.

But ‘isolation’ is a good word here, because this was the only case of prosecution for diazepam possession in 2009.

They also confiscated 253 pills and 8 grams of alprazolam (trade name Xanax) in 18 cases over the same year.

But despite this smattering of arrests, you’d be forgiven for thinking possession of these drugs – and others such as erectile dysfunction treatments like Viagra and Cialis – without a prescription is legal.

Pharmacists across the west coast of the island are more than happy to sell them to tourists, prescription or no. The only documentation required is issued by the Royal Thai Mint. That this happens is well known to the authorities.

Indeed, a high-ranking source in the Phuket Public Health Office admitted his department allowed pharmacies to sell the drugs, albeit only in small quantities.

The regulations could be enforced if the will existed. Most Phuket Town pharmacies, or those in other areas where tourists are scarce, are scrupulous in their adherence to the law.

It seems the availability of these drugs serves to cement Phuket’s reputation as a haven for those seeking pleasure, along with the widespread availability of certain other ‘services’ that are also technically illegal.

But is it right to make prescription drugs so easily available as to appear legal – and then arrest tourists who buy them?

Of course it’s also notable that in the case of the 17-year-old Kiwi, no pharmacist has been arrested for selling the drugs.

In a complex world, joined-up government might be an impossible dream. But in this case it appears that one hand is dishing out prescription drugs – while the other is slapping handcuffs on the wrists of those who buy them.