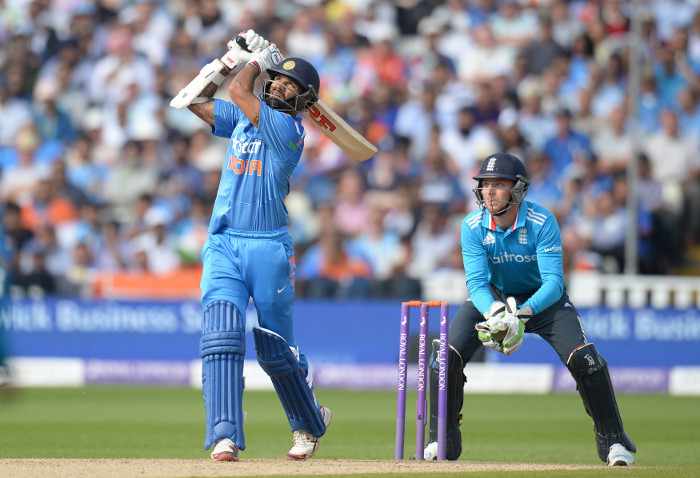 PHUKET: India’s Shikhar Dhawan smashed a six to seal a crushing nine-wicket victory over hapless England in the fourth one-day international in Birmingham on Tuesday.

The tourists cruised to a win that gave them an unassailable 3-0 lead in the series after another feeble England batting display in which the hosts were bowled out for a paltry 206 at Edgbaston.

India’s Mohammed Shami took three for 28 and Bhuvneshwar Kumar and Ravindra Jadeja two wickets each, with Moeen Ali’s fluent 67 the only positive for England.

The Indian batsmen made light work of their chase with Ajinkya Rahane (106) and Dhawan sharing a 183-run opening partnership and the latter smashed the last ball over the ropes to reach the target with more than 19 overs remaining.

“It’s really special and I’m really happy for the team,” batsman Rahane, who scored his 106 off 100 balls, told Sky Sports. “The bowlers did really well.”

“Initially it (the pitch) was doing a bit but I was determined to stay there and focus on the target. The way Shikhar batted today was great to watch from the other end.

“It’s a great challenge to open. You have to prepare your mind and accept that challenge.”

India won the toss and England struggled from the start, the top three back in the pavilion with just 23 runs on the scoreboard.

Kumar removed openers Alex Hales and Alastair Cook in the fifth over and Gary Ballance, who replaced the injured Ian Bell who fractured a toe in the nets, got a leading edge.

Joe Root (44) and Eoin Morgan (32) patiently rebuilt with a fourth-wicket stand of 80 before both fell to spin, Morgan turning Jadeja to leg-slip and Root playing a reverse sweep straight to Dhawal Kulkarni at backward square off Suresh Raina.

Jos Buttler fell lbw to Shami, Chris Woakes was run out by a brilliant low throw from Raina and only some big blows from Moeen took England towards 200, the all-rounder hitting four fours and three sixes before he was bowled by Ravichandran Ashwin.

Harry Gurney took the only India wicket, at least ensuring that England avoided their first ever 10-wicket defeat in an ODI on home soil, when Rahane chipped a full toss to Cook in the covers.

Dhawan finished on 97 not out and India hit 29 boundaries to expose a huge gulf in class between the sides.

“It was a very tough day, it’s amazing how quickly sport changes,” said under-pressure England captain Cook, who many critics and former England players have called upon to resign the one-day captaincy.

“We have played some bad cricket and I don’t know why that is. We’ve not played anywhere near our potential and there’s no excuses.

“India have outskilled us, bowled better, batted better and fielded better. We have to stay true to our beliefs and work hard.”

The final match of the series is in Leeds on Friday. The first game was abandoned.