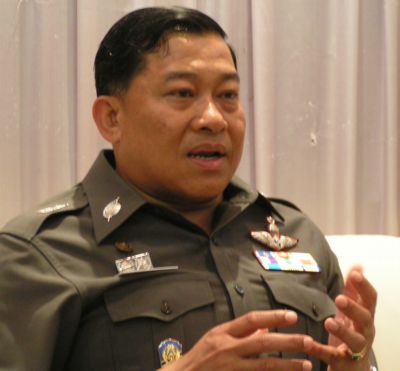 PHUKET CITY: In Phuket to officiate at the opening of the new Phuket Provincial Immigration Office at Saphan Hin today, Immigration Commissioner Lt Gen Chatchawan Suksomchit yesterday announced that he is shaking up his ranks to use technology to be more effective.

Gen Chatchawan, Thailand’s top Immigration officer, said his goal is to improve “national stability” in order to restore investor confidence in the country.

He is on a national roadshow to spread his ideology, which he believes the Immigration Bureau can help achieve by maintaining internal security, better administration and serving justice.

In order for the year ahead to be the “year of investment” for Thailand, radical changes are needed to keep up with rapid development worldwide in the era of globalism, Gen Chatchawan opined.

“The important synergies here are with organizations like Interpol and government departments of many nations that are willing to join forces. Many nations are now supplying Thai immigration with comprehensive data on both known and suspected pedophiles,” Gen Chatchawan said.

Regarding Immigration’s role in apprehending illegal laborers, he said, “It is more important to make illegal workers legal as the country needs them. In the case of Burmese, they can work at rates that Thais will not accept and employers cannot afford to pay more – making them a necessity. Immigration therefore has a policy to legalize them and ensure that they all have correct documentation.”

Speaking about the 54 Burmese who suffocated in a refrigeration truck en route to Phuket on April 9, Gen Chatchawan said, “By law, this incident cannot be classified as human trafficking as there was no employer identified as being involved, meaning that it was simply a violation of entering without passing a checkpoint.

“As far as the other related crimes, such as the shooting of an ex-police lieutenant suspected of playing a role in the deaths, it is the duty of local police to investigate.”

However, Gen Chatchawan admitted, “I do not deny the fact that the integrity of government officials across the board must now be more closely monitored and action taken against those involved.”

Other developments to boost national security include the formation of a “Transnational Syndicate Crime Suppression Center” and a task force to counter forgery of passports, visas and immigration stamps.

In addition, details of where foreigners reside, including satellite pictures, are now stored on a centralized database and monitored for irregularities, he said.

“The system is not only to arrest illegal immigrants but also to offer higher levels of safety and protection to VIP visitors. In order for the database to be practical, only those with visas that allow longer stays and VIPS are monitored,” Gen Chatchawan explained.

He added that networks are being established to share resources between immigration and other national agencies, such as the Internal Security Operation Command (ISOC), Special Branch (Santibaan), Border Patrol and Provincial Police.

Also, informers who prove themselves as having excellent powers of observation, good memories and a concise, accurate reporting style are now issued an ID card that enables them to quickly report a suspicious foreigner and have the case taken seriously by Immigration.

With the aim of smoothing out the immigration process for many foreigners, Gen Chatchawan said that foreigners known to be honest, responsible and posing no threat to Thailand can be issued cards that will facilitate swift passage past immigration checkpoints.

Also, volunteer translators are helping out at immigration offices, and a 1178 hotline has been set up to provide clear, accurate information about immigration processes, he added.