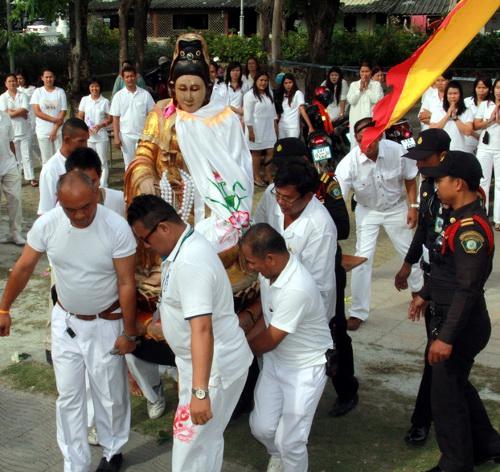 PHUKET: An image of the revered Chinese Goddess of Mercy, Guan Yin, and a jade stamp from China made their annual journey from Pud Jor Shrine to Queen Sirikit Park today as the Old Town Festival commences (see story).

The white jade stamp is a replica of a 1,000-year-old stamp in a shrine in Suining, China, and was presented to Phuket as a gift when the two municipalities became sister cities in 2011.

The stamp and statue were installed in the park by Phuket Mayor Somjai Suwansupana, Phuket Provincial Prison Chief Rapin Nichanon and the Director of the Tourism Authority of Thailand, Chanchai Doungjit. Representatives from Jud Pur Shrine accompanied them.

“We have installed the Guan Yin statue and the stamp at the Queen Sirikit Park so local people and tourists can pay their respects and wish for good luck for themselves and families when they come to visit,” Mayor Somjai said.

“The statue and stamp will be on display there from February 15 to February 17,” she said.

After the festival the Guan Yin statue and stamp will be reinstalled at the Pud Jor Shrine.