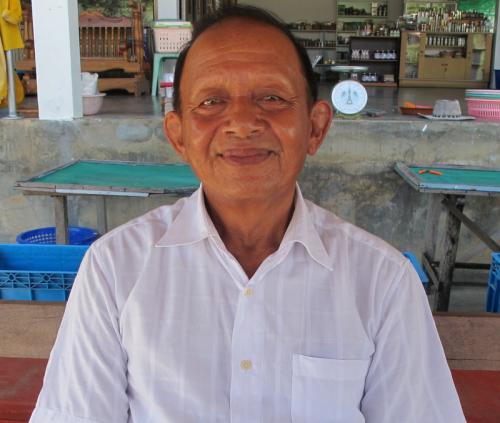 PHUKET: Teeravut Sritularak, 65, was born and raised in Phuket. He is the president of the Jui Tui Shrine and on the management team of Pud Jor and Kiew Tian Shrines. Here he talks about changes in the way Chinese New Year is celebrated in Phuket.

Change is natural, the important thing is understanding the traditions’ true meanings and celebrating them in a smart way.

The way we celebrate Chinese New Year has changed a lot in Phuket, for safety reasons and because older generations have passed away and the new ones don’t see the importance of traditions.

Change is understandable – society changes with time and people adapt their beliefs and culture to the times. We don’t need to worry that the changes will ruin the old culture. What would ruin it is people not understanding the real meaning of celebrations and adapting them in the wrong way.

One practice that has changed in Phuket is leaving house doors open during the Chinese New Year. People used to do this because they thought it allowed the spirits of their ancestors to come into the house to take offerings.

Nowadays, people cannot leave their doors open a long time for safety reasons. So they adapted by setting up tables in front of their houses and opening the doors only when they are praying. This is an understandable and reasonable change.

Another disappearing tradition connected to open doors is the “respect angel” tradition. It is held at midnight on the 8th night of the Chinese New Year. People set up tables with food, sweets and fruit in front of their houses and leave the house door open for a few hours to welcome the spirits of the gods. Again, safety concerns mean fewer and fewer people are doing this.

Phuket City Municipality is trying to promote the “respect angel” tradition by providing a place – Queen Sirikit Park in Phuket Town – where people can celebrate together. They solve the safety problem this way and help preserve the tradition.

Actually, I would be happy to see each house doing it again like in the past, it looks beautiful and amazing, but I understand that it is difficult. Times have changed.

I am just happy that the old festivals such as Chinese New Year and the Vegetarian Festival still exist. Celebrating them differently is better than completely losing them.

One thing that hasn’t changed is the use of firecrackers.

From the tourism, safety and health point of view, not allowing firecrackers would be better. I have heard that a lot of tourists have been injured by firecrackers. Others were scared and did not want to join in ceremonies. Also the smoke from the firecrackers is not good for health.

On the other hand, firecrackers are an important part of Chinese celebrations. If there were no firecrackers, people might feel like the celebration wasn’t complete. For example, they believe the lighting of firecrackers during the Chinese New Year brings their lives prosperity and good luck.

In my opinion, meeting halfway is best – preserve the old ways, but keep in mind the new realities. Now Phuket is a famous tourist destination. Let’s recognize that by not using too many firecrackers; using only the legal kind; and lighting them only at appropriate times and places.

When the Chinese celebrations are coming up, the governor calls me in for a meeting and I always ask him to warn people about the use of firecrackers during the celebration. I do not want to see a beautiful tradition ruined by a few careless people.

For a sample of fun Phuket Chinese culture take part in the Old Town Festival in Phuket Town this weekend (story here).