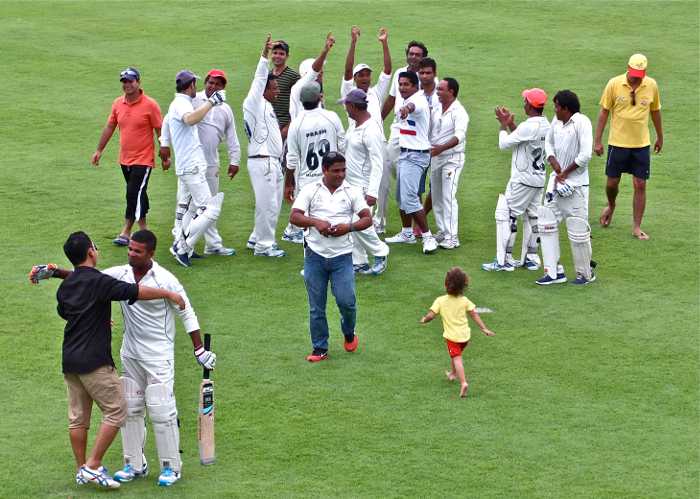 PHUKET: The final of the Outrigger T20 took place on a gloriously sunny day at the Alan Cooke Ground between the Bondi Bar Bashers and the ICC. BBB’s had only lost one game all season, however, that was against ICC and they were very keen to avenge the loss and claim the title at the same time. ICC had been a dangerous team all season with some explosive batting and tight accurate bowlers. It was set up for an epic final with both teams confident of a win.

ICC won the toss and invited BBB’s to have a bat. This would have suited Captain Seemant Raju who’s team prefers to set the total. Back from a break was prolific batsman I Mushtaq, who opened with Seemant Raju. Both Batsman looked to play positively from the start, however, it was I Mushtaq (13) who went first chasing a wide delivery and getting a thick edge to the keeper. This brought Paddy Morton to the crease who continued the steady flow of runs until Seemant Raju (18) was clean bowled by A.Virdikar looking to hit over the top of the infield. Dave Thomas was next in, and together with Paddy Morton, steadied the BBB’s innings and put on a valuable 54 run partnership. Both players looking to play positively to the drinks break against accurate ICC bowling.

After drinks, Dave Thomas (27) misjudged a single and was run out from a superb throw trying to regain his ground. Neil Quail (1) was the next batsman but was sent back to the dressing room soon afterwards being caught and bowled off R Naik. Paddy Morton (34) continued to push the runs but was brilliantly caught on the boundary by P Borkar after a good innings. Pir Sami (3) and Anthony Van Blerk (19 not out) continued to look for every available run until Pir Sami was caught off R Naik. J Swart (9) and Richard Desmond took the total to 143 after their 20 overs. BBB’s were awarded 6 penalty runs at the interval for a slow over rate by ICC which took the total to 149.

With a good total to chase, ICC came out to bat with an aggressive attitude. S.Ullah and J. Mohammad were the openers, but BBB’s got an early breakthrough with I Mushtaq trapping S. Ullah (1) LBW in the second over. This brought A.Chand to the crease who, together with J Mohammad, started to plunder the BBB bowling attack. To try to slow the run rate down, Paddy Mortons spin was introduced which worked a treat as he had A Chand (10) trapped LBW. Wickets became hard to come by as the new batsman A Virdikar punished any loose deliveries.

The breakthrough came when Pir Sami pulled off a great catch on the fine leg boundary to send the big hitting J Mohammad on his way for a brilliant 44 runs. Pir Sami was again in the action with another fine catch to dismiss A Virdikar (17).

At this stage it was anyone’s game. S Kumar attacked for his 14 runs but a fantastic catch by Thai youngster Pao Suttiprapha again put BBB’s back in front. D Vaiganker (11) was dismissed by I.Mushtaq as Seemant Raju took a very sharp catch fielding close in.

Tension was high with the last over approaching. However, it was B Desai and A Salem who were the two not out batsman at the end, securing a famous and hard fought victory for the ICC with 4 balls to spare.

So concludes the Outrigger T20 competiton. Phuket cricket now has a few weeks break before the start of the 35 over league.

Kids Junior cricket is also taking place at the ACG on Saturday mornings. If you would like your children, both girls and boys, to get involved then please contact chairman@phuketcricketgroup.com.