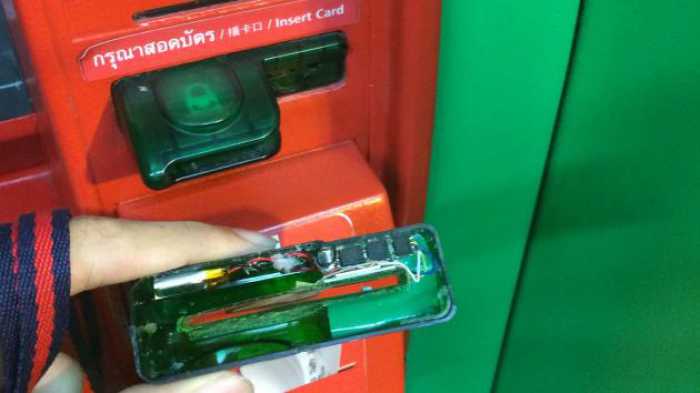 PHUKET: A Russian has been arrested for allegedly installing a “skimmer” device to steal PIN numbers of cardholders who used an automatic teller machine (ATM) at a 7-Eleven convenience store in eastern Bangkok.

The new device was said to be able to deter counter-skimmer measures that commercial banks in Thailand had devised to try to combat this type of fraud. Each skimmer can be installed on an ATM in only 16 seconds, police sources said.

The suspect was identified as Anton Lilin, 30. Police sources said he told them he would be killed by other members of the gang based in Russia if he revealed details of this crime to police.

Hua Mak police said they were looking for another Western-looking man seen with Lilin in surveillance camera footage, who had fled.

The suspect has been charged with possessing and using devices capable of stealing people’s confidential data via electronic media or cards, and using forged media or cards with intent to steal, as well as illegal entry.

The sources said Lilin got anxious when stating that he belonged to an influential Russia-based racket and asked not to give further details apart from the fact that he and three compatriots had entered Thailand recently.

He was the group’s technician tasked with installing the skimmer devices at ATM machines, which he said could be done in 16 seconds.

Speaking at a press conference yesterday, Hua Mak police said they had arrested Lilin last Monday in a stakeout following tip-offs a day earlier by customers of the 7-Eleven branch.

Lilin appeared to match video footage and there was another Western-looking man, who did not show up with Lilin on the night he was arrested.

The ATMs targeted for skimmer installation were located in areas where withdrawals of large amounts of money were frequent.

The skimmer was found to have previously been used on a Siam Commercial Bank ATM, he said.

Lilin told police many skimmer sets had been installed on ATMs of various banks, but no details were available on which banks they were. Interrogation of Lilin was ongoing, he said.

Bank clients’ information including PIN numbers for their accounts would be saved and sent abroad, so that they could be extracted, processed, and eventually used to withdraw money from accounts, for which PIN numbers were stolen, Pheerarat said.