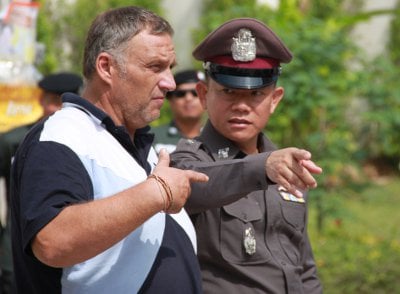 PHUKET: Gyorgy Lajos Kvalka, the second suspect arrested in connection with the murder of Peter Reisz in Phuket late last month, today reiterated to police his claim that he played no part in the killing of the Hungarian businessman.

However, Mr Kvalka today did confess to assisting the Israeli-Hungarian dual national Moshe David – named as Gabor Nemeth on his Hungarian passport – with disposing of Mr Reisz’s body and mopping up the blood at the scene of the crime.

Under heavy police escort, Mr Kvalka this morning was ushered into the house where the killing took place, in a quiet residential estate off Wichit Songkram Road near Kathu.

Speaking through a translator, he related to police his version of events that led to the death of Mr Reisz.

“Mr Kvalka told us that he parked his car [a black Toyota Fortuner] outside the house while Mr David came into the house to talk with Mr Reisz,” said Maj Gen Wissanu Muangprasee, a deputy commissioner of Provincial Police Region 8.

“He said he heard a fight break out inside the house and he rushed inside to stop it. He denied hitting Mr Reisz with a piece of wood and denied stabbing him with a knife. He said that Mr David did that,” the general added.

Although Mr Kvalka denied any involvement in the actual killing, he did confess to assisting Mr David in disposing of Mr Reisz’s body.

After leaving the house, Mr Kvalka led police to the rubber plantation on the eastern slopes of Patong Hill where he and Mr David dumped Mr Reisz’s body, with hands bound and head and torso covered with a black plastic trash bag.

“He confessed to helping Mr David with taking Mr Reisz’s body to the rubber plantation. He drove the car. He also said he helped to clean up the blood in the house and repainted the wall in the house that was stained with blood,” Gen Wissanu said.

Meanwhile, associated investigations into the murder have led to police unravelling the mystery of why Mr Reisz was in house in the first place.

“Previously, we had a missing piece to the puzzle, which was how Mr Reisz came to arrive at the house, but now we have learned that Mr David bought a new SIM card and sent many messages to Mr Reisz while pretending to be a Thai woman,” explained Gen Wissanu.

“Then one day he [Mr David] tricked a Thai woman into calling Mr Reisz by using the same mobile phone that Mr David used to send the text messages.

“Mr David told the woman that he and Mr Reisz had a problem and that Mr Reisz would not come to the house if Mr David asked him, so he convinced the woman to call Mr Reisz and trick him into coming to the house to see her,” he added.

With this new information, Gen Wissanu was optimistic that police would conclude their investigations soon.

“This is why he was at the house that day. Now we have the answer to this we can move ahead and the case can be closed.

“We have a little more investigating to do as Mr Kvalka’s story doesn’t match other statements, but we expect to present the case to Phuket Provincial Court within the next two weeks,” he said.