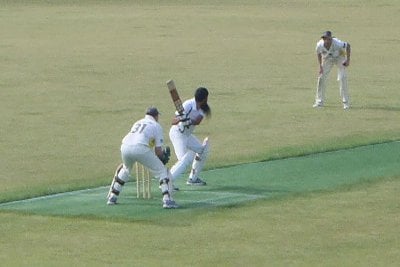 PCC won the toss and elected to bat, losing their fist wicket in the second over. After a cautious start, opener Mike Khan found his straps and scored a quick fire 46 runs off 42 balls. Khan was supported at the crease by Dave Thomas (38), who survived being bowled only for the umpire to call a no ball, and Manish Sadarangani (33).

The ICC bowling attack toiled long and hard, but due to some poor fielding they let the opportunity to restrict PCC to a small total slip through their fingers. PCC were happy at the end of the allotted 35 overs scoring 229 for 8.

The batting prowess of the ICC team is well known and Patong needed a good bowling performance backed up in the fielding department to secure victory – they delivered the goods.

The first ICC wicket fell in the third over. The ICCs’ run chase was hindered by the bowling of P Morton (4 for 42). Batsman A Ahmed, 42 off 32 balls, revived his compatriots’ hopes with some hefty blows, but it was to no avail, as PCC eventually took the last wicket in the 32nd over with the score on 161.

This weekend the ICC take on TNT. The match is scheduled to start at 9am on December 16 at the Alan Cooke Ground.