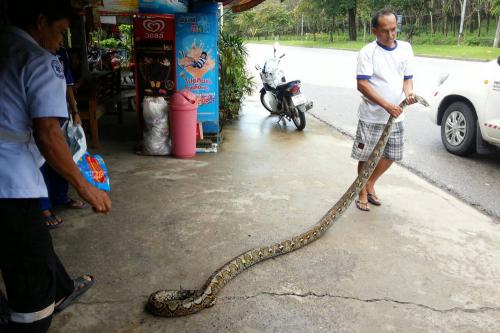 PHUKET: A man checking his house for leaks during heavy rain in northern Phuket this morning spotted a huge python near the back of the house, trying to get in.

Chokdee Inklub was checking every room of his home at Baan Yid, in Mai Khao, to ensure water was not damaging his furniture or posing a danger near exposed power sockets.

When he got to his back door, however, he saw a python nearly five meters long.

“I think it was trying to find a dry place out of the rain. But when I saw it trying to come into my house, I called rescue workers for help,” Mr Chokdee told the Phuket Gazette.

Rescue workers from the Kusoldharm Foundation, who are well practiced in catching and releasing snakes found near homes across Phuket, arrived shortly thereafter.

“It didn’t take long to trap the snake. It seemed weak, and looked very tired,” one rescue worker said.

The python was bagged and later released at an undisclosed jungle location.

Hit-and-run bus-driver turns himself in