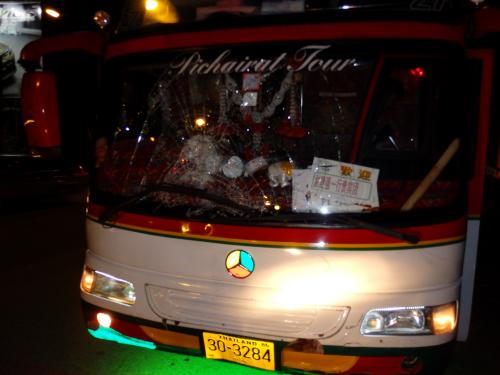 PHUKET: The driver whose bus struck a Myanmar national crossing Thepkrasattri Road, killing her instantly last Thursday, turned himself in to the police a few hours after the accident.

Mr Natthanapong told the police that he had absolutely no intention of harming the pedestrian.

“She ran in front of the bus, and I could not brake in time, or switch lanes as there was a car in the lane next to me,” he told the police.

“After the accident, I pulled the bus off the road about 400 meters from where the collision took place. I ran because I was afraid of being attacked by locals – that is why I went to the police station instead of going back to the scene of the accident,” he explained.

“If he had tried to take evasive action there might have been a much worse accident. Nevertheless, Mr Natthanapong has been charged with reckless driving causing death,” Maj Kittipoom explained.

Meanwhile, the victim’s body remains at Thalang hospital, awaiting relatives to claim it for burial or cremation.

“Nobody has come to identify her,” Maj Kittipoom said.