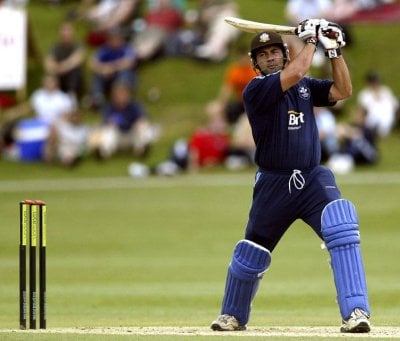 KARON: Former England Test cricketers Adam Hollioake and Alan Mullally will take part in the Lighthouse Phuket International Cricket Sixes 2006 to be held from April 12 to 16 at the Karon Stadium.

“It looks like it’s going to be a fantastic place to spend a week playing cricket – although it might be a little less intense than playing at the Oval or in Sharjah!”

Hollioake, 34, a successful former captain of the Surrey & England One-Day International (ODI) team in Sharjah and also the former coach of Hong Kong, retired from first-class cricket only two years ago. He played in four Test matches and 35 ODIs for England between 1996 and 1999.

He recently came out of retirement to play in a World XI against an Asian XI in a Twenty20 charity match in aid of Asian tsunami victims, played at London’s famed Oval in June last year.

Alan Mullally, too, says he is looking forward to coming to Phuket. “With 28 teams from around the world playing, the Phuket Sixes is a pretty large international tournament. I’m really looking forward to the experience of playing cricket in Thailand.”

He really made his mark in ODIs, not so much for his penetration as for his accuracy. His economy rate was so good that at one time he was listed as the second-best ODI bowler in the world.

“It’s a real coup to have cricketers of this caliber playing in the tournament,” said Michael “Cat” Maher, Chairman of the Co-Organisers of the Asian Cricket Sixes Tour.

“The presence of players of this caliber at the event is a great reflection on the amazing growth of the Phuket Cricket Sixes as an international cricket tournament since the first event just two years ago.”

Also adding his support to the Phuket Sixes is the former Australian Test batsman and regular competitor at the Phuket Sixes, Trevor Chappell, one of the three legendary Chappell brothers.

The competition features the popular, shortened version of cricket, enjoyable for players and spectators alike.

It starts on Wednesday April 12 at Karon Stadium, with the Finals taking place the following Sunday.

A 20-over charity match will be played under floodlights at the Karon Stadium on April 15 from 6 pm featuring all the tournament’s top players. Proceeds from the match will go towards the event’s chosen local charity, Childwatch. Entrance for spectators is free and all are welcome.