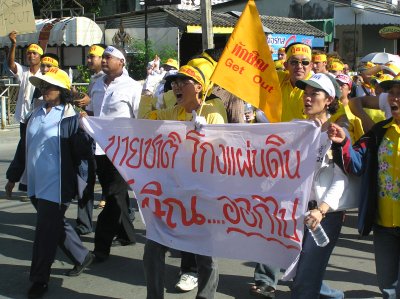 PHUKET CITY: Some 200 members of the Phuket branch of the People’s Alliance for Democracy (PAD) marched today from the CB Market on Bangkok Rd to Provincial Hall.

The marchers, who included a handful of foreigners, took a roundabout route through the city, taking about an hour and a half to reach their destination, and shouting “Thaksin, Get Out!” along the way.

At Provincial Hall, they handed Governor Udomsak Uswarangkura a document informing him that they were urging the Phuket electorate to tick the “no vote” box on ballot papers in next Sunday’s general election.

Before passing it to the smiling Governor, the President of the Phuket PAD, Manu Kaewkram, read out the document, which explained that the PAD wanted people to support “real democracy” and protest against the political parties that are supporting Prime Minister Thaksin Shinawatra by contesting the election.

As K. Manu handed the PAD document to the Governor, the protesters sang the Royal Anthem.

K. Manu said afterwards that the PAD would continue to hold protest meetings at Saphan Hin until PM Thaksin steps down.

Hollioake and Mullally for Phuket Sixes