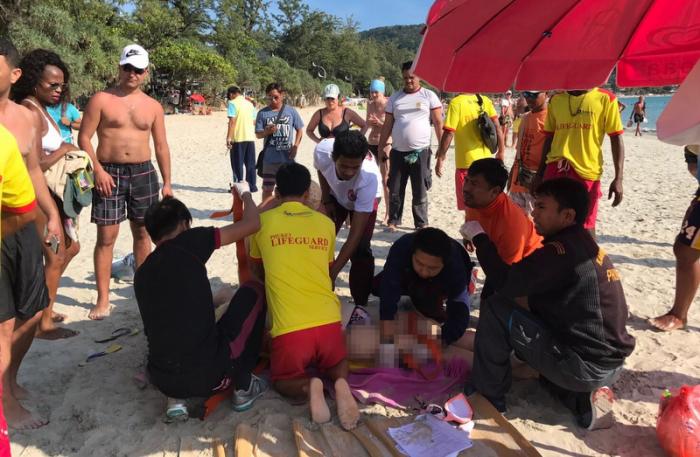 PHUKET: A 20-year-old Australian woman was killed in a jet-ski collision with her husband at Kata Beach yesterday evening.

“Other beachgoers came to her aid and lifeguards administered CPR (cardiopulmonary resuscitation) while waiting for police and rescue workers to arrive,” said Lt Col Patiwat Yordsuan of Karon Police.

Ms Collie was rushed to Chalong Hospital, where she was pronounced dead. Her body was then transferred to Vachira Phuket Hospital for an autopsy to determine the cause of death.

“The couple were staying at a hotel in Karon and had rented two jet-skis to ride together to Kata Beach. After their jet-skis collided, the husband carried his unconscious wife on his own jet-ski, shouting for help,” said Col Patiwat.

“The exact cause of the accident has not yet been determined as her husband is in shock, so we cannot ask him much. We expect that they were both riding at high speed and lost control of their jet-skis,” Col Patiwat added.

The victim’s husband suffered minor injuries. The Australian embassy has been informed of Ms Collie’s death.

Jet-ski rental operators have been under public fire for at least 20 years in Phuket due to the numerous deaths and injuries, legendary scams, and brutish local operator behavior. But despite the volume of complaints from tourists, local residents and hotel managers, there has been no success in shutting down the jet-skis – or even in curtailing, or simply regulating, their use on Phuket’s beaches.