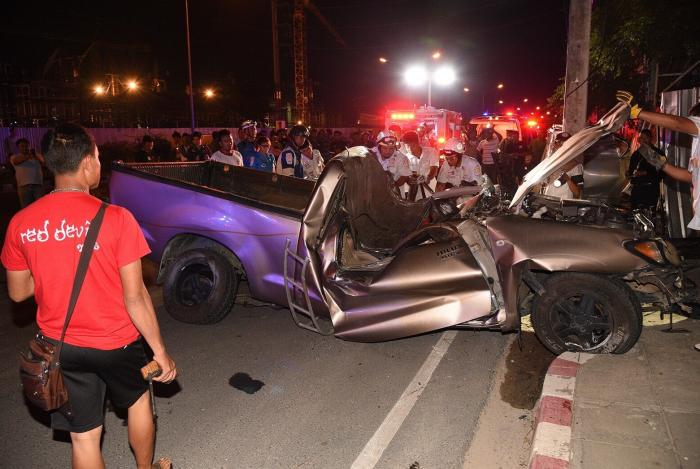 PHUKET: A Rawai local was killed early this morning when his truck crashed into an electricity pole in front of Central Festival Phuket.

Lt Patcharee Wongboon of Wichit Police received reports of the incident at about 4:30am.

“We arrived with rescue workers to find the heavily-damaged brown Toyota Vigo pick-up truck flipped over to its left side and smashed into the pole,” said Lt Patcharee “The entire roof of the vehicle had caved into the cabin, and its canopy had been ripped off due to the impact.”

The driver, named Aroon Keekas, 39, was lodged inside and already dead when the officers arrived. “Rescue workers had to use Jaws-of-Life to pry Mr Aroon’s body out of the truck. His body was taken to Vachira Phuket Hospital,” he added.

“Witnesses told us that Mr Aroon was coming from Naka and turned at the Darasamuth Intersection on his way to Kathu. They said they heard a tire blow-out, and then saw the truck jump the road divider to the other side of the road in front of Central Festival before it crashed into the pole.”

The truck was carrying more than 10 large boxes. Police said that they were currently not sure whether it was specifically the truck’s speed, the tire blowout or the heavy load that caused the crash.