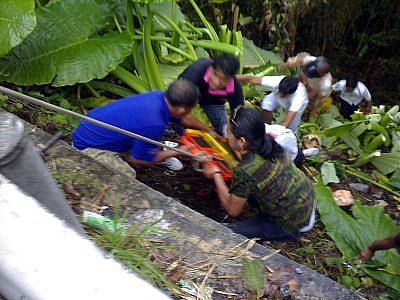 PHUKET: Phuket police are searching for the driver of a pickup truck that was involved in a hit and run on the Chalong-Kata Hill on Sunday.

Witnesses reported seeing the pickup collide with a motorbike, resulting in the woman rider plunging over the edge of the steep slope and landing in a ravine about eight meters deep.

The accident was in precisely the same location where a tour bus full of Chinese tourists went off the side of the road on October 22.

According to the police report, witnesses described the pickup as a “white or bronze colored Toyota without a seat behind the driver”.

Phuket Ruamjai Rescue Foundation Chief Sayun Thummaphun told the Phuket Gazette that he received a dispatch call from the Narenthorn Center at Vachira Phuket Hospital, in Phuket Town, at about 12:48pm.

“We arrived to find 51-year-old Jitra Puenrak lying at the bottom of the ravine, about eight meters below the road.

“She was conscious with a broken right leg and a serious two-inch gash under her chin,” he said.

The team used a rescue board and rope to lift Ms Jitra to safety.

“The rain made it very difficult to get her back up from the ravine,” Mr Sayun said.

He presumed that Ms Jitra worked for a hotel in Kata because she wore black trousers with a white shirt that “looked like a kitchen uniform”.

“We rushed her to Phuket International Hospital, where at last report she was in safe condition,” he said.

No “nipple gangs’ in Phuket: Police