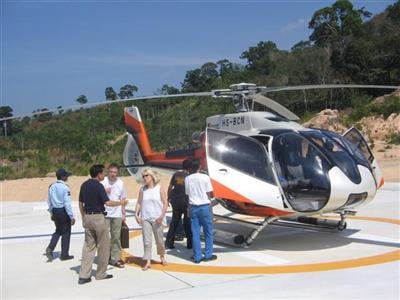 SAKOO, PHUKET: Phuket’s super-rich take note: the island now has its own luxury charter helicopter service ready to fly VIP tourists and businessmen to luxury resorts in the Andaman region.

Advance Aviation launched its Phuket service from its brand new helipad in Sakoo on January 9, flying about five flights during its first month in operation.

The company now operates its second aircraft out of Phuket, a single-engine Eurocopter EC130 in “VIP configuration”, with six passenger seats and one for the pilot.

The Advance Aviation helipad is located on a 28-rai plot of land on the old airport road, about two kilometers South of Phuket International Airport

Total investment in the Phuket base was about 90 million baht, including the purchase of two Chanote title deeds and infrastructure including the helipad, a hangar and offices.

In total the company ordered four aircraft from Eurocopter, with which it has established a regional maintenance and repair center in Bangkok near Suvarnabhumi Airport. It expects to take delivery of the third and fourth aircraft over the next two years.

Advance Aviation is the only helicopter charter aimed exclusively at the VIP market in Thailand. Ownership is by Mr Chai and one other partner, who have 270 million baht in registered capital.

Mr Chai said he started the company almost by accident as a service for his father, Privy Councilor Chaovana Nasylvanta Chaovana, who lives in Sri Racha district of Chonburi.

As a Privy Councilor, Dr Chaovana has regular Tuesday audiences with HM The King, who spends most of his time at his palace in Hua Hin.

“By car it takes four-and-a-half hours, but by helicopter it’s only 35 minutes across the Gulf. Initially we bought the first helicopter for my father to use on Tuesdays. We chartered it out on other days to recover some of the costs, but it turned out that the market was so good that we decided to make it into a business,” he said.

Thus far there have been no complaints about noise from local residents. The EC130 is the quietest helicopter in its size class and the service is only allowed to operate during daylight hours, he said.