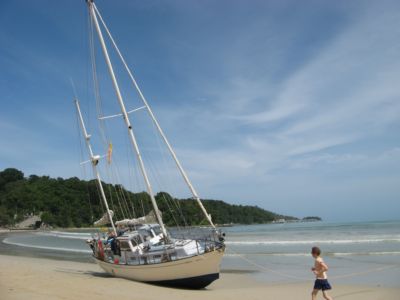 PATONG: Six days after it washed up on the south end of Patong Beach, the 38-foot sailboat Sultan remains high and dry after several unsuccessful efforts to dislodge and re-float her.

The Sultan washed up on the south end of Patong Beach during a strong storm about 1 am on Tuesday.

Skipper Michael Wilson of the UK, who was asleep on the fiberglass vessel when it hit the shore, told the Gazette he had anchored off Patong after an exhausting 17-day solo sail across the stormy Indian Ocean from Sri Lanka.

Pol Sgt Payong Chitsombat of the Tourist Police office in Patong told the Gazette that Patong Municipality had already offered the Briton free use of a tractor to free the vessel from the sand.

However, the cash-strapped Brit declined the offer after being told he would have to hire a large boat to tow the vessel back out into the bay at high tide, Sgt Payong said.

“It can’t be moved by heavy equipment alone, but also needs to be towed out by another vessel,” he said.

Mr Wilson had told the Gazette earlier, “I have no money to pay to refloat the yacht, and in my country if an accident like this happens there is no need to pay any money, too.”

Officials continued to bring Wilson food and have left phone numbers so they can be contacted for more help.

“We don’t know what else to do to help him, because we have tried to organize everything as best we can. We also contacted the British Embassy, but it seems like he doesn’t want to take any action on his own,” said Sgt Payong said.

“If he leaves the yacht as it is now, it will suffer damage for sure. I don’t what is he thinking. [Thursday] night I went there again with British member of the Volunteer Tourist Police, but he acted as if there were no trouble at all,” he added.

Meanwhile, the beached sailboat continues to be a talking point among tourists, locals and resident expats.

“Maybe he will start a trend,” quipped one, noting that Wilson had set himself up with free-of-charge accommodation in an “absolute beachfront” location.