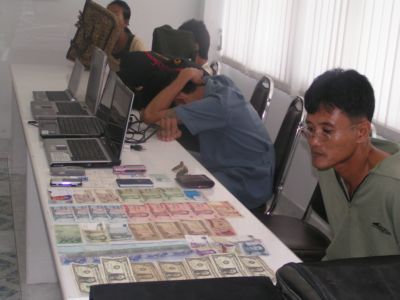 PHUKET CITY: Provincial bureaucrats will sleep better at night, following the arrest of a man wanted for stealing valuables from government offices on the island.

Prayuth’s arrest followed a report to police by officials at the Phuket Provincial Administration Organization (OrBorJor) offices, where images of Prayuth with office property in hand were captured on closed-circuit television cameras (CCTV) on June 2.

Police said that Prayuth had also admitted to roaming the corridors of schools, municipal offices, student dormitories and patient wards at Mission Hospital and Vachira Phuket Hospital in his quest for valuables to pilfer.

Prayuth’s modus operandi was to arrive in a rented Jeep at his target location around noon under the pretext of conducting official business, but knowing that government offices on the island are often unattended from noon until 1 pm, when officers break for lunch, Col Nos said.

“He was released from prison last month on similar charges. He did the same type of thing in Surat Thani,” Col Nos told reporters.