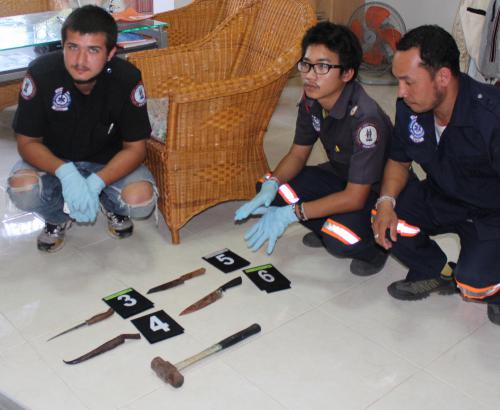 PHUKET: A Swedish expat who had repeatedly told his girlfriend he wanted to die because of health problems killed himself yesterday after sending his girlfriend out to buy lunch.

When Kotchamon Boonraksa, 38, returned to the house in Rawai an hour later, the doors and windows were locked.

“I called his phone again and again, but he didn’t answer,” she said. “When I heard something fall onto the floor, I broke in through the back door.”

Once inside, Ms Kotchamon found Per Torben Lindgren, 57, lifeless on his bed. His throat had been cut.

Police and Ruamjai rescue workers called to the scene found three knives and a hammer all stained with blood on the floor, said Capt Thada Sodarak of the Chalong Police.

Ms Kotchamon told officers that the couple had lived in the house for about three years.

“We didn’t have any problems with each other and we didn’t argue,” she said. “But he said many times that he wanted to die because of health problems.”

Mr Lindgren had been sick recently and had a checkup with his doctor. He was supposed to go in to get his test results today, Ms Kotchamon said.

Capt Thada said police would question neighbors and review autopsy results from Vachira Phuket Hospital before confirming the cause of death.