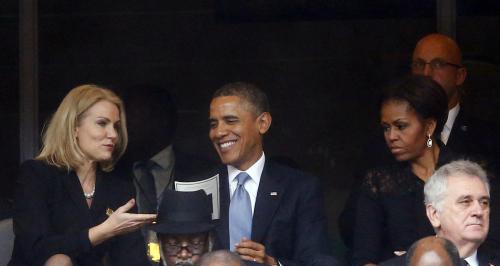 
Cameron defends Mandela funeral selfie with Obama
Reuters / Phuket Gazette
PHUKET: British Prime Minister David Cameron on Wednesday defended his behaviour at Nelson Mandela’s memorial service in South Africa after he was criticised at home for posing with U.S. President Barack Obama for what some said was a disrespectful photograph.

The self-portrait – known as a “selfie” in online social media – was taken on Tuesday in Soweto at the memorial event for Mandela, who died last Thursday aged 95.

It captured Cameron and Obama – who suffered a similar ticking off in the U.S. media – smiling broadly either side of Danish Prime Minister Helle Thorning-Schmidt.

All three appeared to be in high spirits and sharing a joke as a stern-faced Michelle Obama looked away.

The image graced the front pages of many of Britain’s newspapers on Wednesday, with the mass-market Sun tabloid newspaper calling it a “gaffe” that betrayed a lack of respect for the late South African politician.

Cameron, who is trying to court the Sun’s readers ahead of a 2015 election, was asked about the incident during his weekly question and answer session in the British parliament.

“You should always remember that the television cameras are always on,” Cameron told parliament. “In my defence I’d say that Nelson Mandela played an extraordinary role in his life and in his death in bringing people together.”

So when asked by the Danish prime minister to join the photograph he said he had thought it only polite to agree since she was married to the son of a former leader of the opposition Labour Party.

Separately, Cameron’s spokesman stressed the event had been a “celebration” of Mandela’s life rather than his funeral, which is due to take place on Sunday.

DeafSA, South Africa’s leading deaf association, condemned the presence of the unknown man at the memorial to Mandela attended by President Jacob Zuma and scores of world leaders including U.S. President Barack Obama.

While dignitaries were addressing the crowd in the 95,000-seat Soccer City stadium, the young suited man with an official security pass round his neck produced a series of hand signals that experts said meant absolutely nothing.

“He was basically gesturing. He didn’t follow any of the grammatical rules and structure of the language. He just invented his signs as he went along,” said Delphin Hlungwane, an official South African sign language interpreter at DeafSA.

Hlungwane said the ‘interpreter’ also failed to impart to television viewers – as he should have done – that the crowd gave a hostile reception to Zuma, a scandal-plagued leader who faces an election in less than six months.

“You’re supposed to indicate with your facial expressions, even if it’s not an exact sign,” she said. “He didn’t indicate that at all. It just passed him by.”

The hunt is on for the mystery man.

“Nobody knows who he is. Even at this hour we still don’t have his name,” Hlungwane said.


Ukraine protesters defy police, leaders reject talks with president
Reuters / Phuket Gazette
PHUKET: Ukrainian protesters stood their ground on Wednesday after an overnight sweep by riot police and their leaders dismissed an offer of talks from a president they say must quit for favouring ties with Russia over the European Union.

Pressed by Europe and the United States, which condemned the destruction of a protest camp in central Kiev, President Viktor Yanukovich offered to meet opposition leaders to find a way out of a crisis that blew up last month when he yielded to pressure from Moscow and spurned a free trade deal with the EU.

But his opponents, whose supporters continued to occupy the capital’s City Hall, rejected his invitation and stuck to demands that the president and his government resign.

The authorities had made their most forceful attempt so far to reclaim the streets, sending in battalions of riot police with bulldozers to clear Independence Square. There were scuffles and arrests but police did not enter the nearby City Hall and by morning they withdrew from the streets.

Within hours, after meetings with U.S. and European Union officials who had urged him to compromise, Yanukovich asked his opponents to meet him to negotiate a way out of the impasse:

“I invite representatives of all political parties, priests, representatives of civil society to national talks,” he said in a statement that also called on the opposition not to “go down the road of confrontation and ultimatums”.

One protest leader, Oleh Tyahnibok, dismissed the move as “a farce and a comedy”, while Arseny Yatsenyuk, a leader of a major opposition party, said there should only be talks once their demands had been met. These include the resignation of the president and government and a release of prisoners.

In some of the strongest comments from Washington so far, the White House spokesman urged Yanukovich to listen to the people and resume Ukraine’s integration with Europe: “Violence of this sort that we have seen on the streets of Kiev is impermissible in a democratic state,” he added.

Secretary of State John Kerry spoke of “disgust” at the use of force and a spokeswoman for his department said Washington was considering sanctions against Ukraine, among other options – a move that could further sour relations with Russia, which says the West is trying to browbeat Kiev to weaken Moscow.

At stake is the future of a country of 46 million people, torn between popular hopes of joining the European mainstream and the demands of former Soviet master Russia, which controls the flow of cheap natural gas needed to stave off bankruptcy.

At the main protest camp on Independence Square, pop stars, politicians and priests had pleaded with police not to shed blood. The interior minister called for calm and promised that the square would not be stormed. But even after the police left the streets, Vitaly Klitschko, a world boxing champion who has emerged as one of the main figures of the opposition, said the overnight action had “closed off the path to compromise”.

“We understand that Yanukovich has not wish to talk to the people and only understands physical force,” he said.

The interior ministry appealed for restraint, however, and the police action stalled after day broke, with temperatures in the snowbound city stuck well below freezing. Some riot police left to cheers from lines of protesters.

At City Hall, demonstrators had sprayed police with water from a hose and had lobbed a Molotov cocktail from a window into a police truck before the officers finally withdrew.

On the square, protesters, many wearing hardhats in orange, the colour that symbolised a successful popular revolt agains