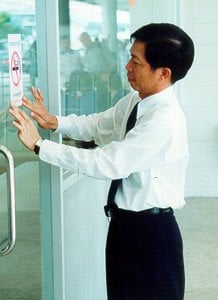 PHUKET: Dr Wanchai Sattayawutthipong, Chief of the Phuket Provincial Health Office (PPHO), and a team of PPHO officers this morning conducted the province’s first inspection of venues to enforce the smoking ban that came into effect on Friday. The inspection began at 9 am at Phuket International Airport. The two Caffe Retazza cafes attracted the team’s attentions with their “Smoking Pub” signs above the door. In one cafe, officers found five customers smoking. “We also found that the air-extraction system did not work well,” said Dr Wanchai. He said that he asked Chan Chiamcharoen, Deputy Airport Manager, for the “Smoking Pub” signs to be removed from above the doors and for “No Smoking” signs to be put up in the cafes. “I have notified K. Chan that he must have these problems rectified within a week. We will return to inspect the premises again next Friday or thereabouts,” he said. Dr Wanchai also commented on the noticeable smell of cigarette smoke in enclosed areas, such as the domestic departure gates. “Somebody might complain about that,” he said. K. Chan said, “We’ll need time to rearrange our place. It’s impossible to change everything in a day.” Next, the team moved on to Thalang District Office, followed by Big C Superstore, where they inspected the Zen Japanese restaurant and the CS Bowl bowling alley. All three venues were found to be fully compliant. After the inspection, Dr Wanchai told reporters that any person who sees someone smoking in a no-smoking zone can call the police and have the offender removed.

Paradorn to play in Phuket