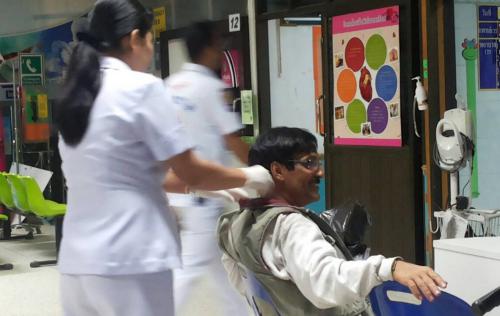 PHUKET: A French tourist leaching yellow pus from the back of his neck prompted fears that he might infect other passengers at Phuket International Airport on Friday.

“We were called to the airport at 11:45pm,” a Kusoldharm Foundation rescue worker told the Phuket Gazette.

The rescue workers took Mr Godfroy to Thalang Hospital, where the Frenchman at first resisted nurses’ attempts to clean and dress the wound.

“He refused any treatment for over an hour. Each time a nurse dressed the wound, he pulled it off,” the rescue worker said. “All the while, the Frenchman kept singing.”

“Over the weekend, doctors had Mr Godfroy transferred to Vachira Hospital Phuket, where he is still receiving treatment for the wound on his neck,” Capt Akachai Siri of the Tourist Police in Phuket Town told the Gazette today.

“Doctors have performed some basic tests, and are concerned for Mr Godfroy’s current mental state. They have contacted the French embassy so officials can get in touch with his relatives and make appropriate arrangements for getting Mr Godfroy safely home,” he said.