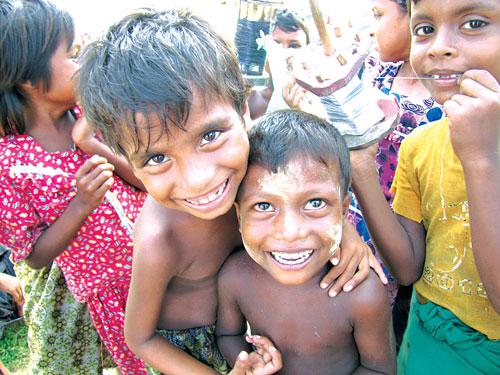 PHUKET: They say “what you give is what you get”. But Simon Luttrell, a Phuket-based hotel owner wants to take it one step further. His goal is to give to people who have very little and expect nothing in return.

It was 2005 when Simon built his first hotel in Phuket – a small building near the international airport. And it didn’t take a long time for Simon to learn, that while the rooms are packed in the high season, they often remain sadly empty during the rest of the year. And the same way as we sometimes leave the spare change in the donation box in a supermarket or give old clothes to charity, Simon decided to offer the free rooms to people who couldn’t afford them:

“I wanted to provide accommodation for disabled children, for children who for whatever reason couldn’t afford a holiday – children who were terminally ill for example,”

Due to unforeseeable circumstances, his first charitable project unfortunately never came to fruition. But the idea, once planted in Simon’s head, never went away.

“Now I have the opportunity to build another hotel and so I went back to my original idea of offering those rooms on a fee-free basis to those who would appreciate a holiday, but cannot afford it,” he says.

And this time his eyes are set on Rohingya refugees in Thailand.

We all know, though maybe not always remember, the tough lot of the Muslim minority Rohingya people, fleeing persecution in Myanmar to seek safety in Southern Thailand and Phuket.

Simon, having lived in Myanmar and worked with anti-human trafficking organizations, doesn’t believe that this fraught and seemingly intractable situation will change for the better in the foreseeable future. But seeing it as a helpless case is by no means a reason to quit and admit failure. Quite the opposite.

“All I can do, in my own little way, is try to alleviate some of the problems that some Rohingya experience,” he says.

And for a hotel owner this “little something” is a free holiday for people who need it, maybe more than anyone else.

“I want to offer a holiday for people who don’t have the means for a short break, simply to make themselves more happy. I can’t do anything on a political level, I can’t do any major thing. I have to do what’s within capabilities of my own finances, my own knowledge and experience.

“What I’m trying to offer is happiness. That’s why this project is called the Phuket Happy Hotel. It’s offering friendship and happiness, a chance to forget about problems, maybe play together as a family on the beach, and not worry about the cost.” he explains, adding, “I’ve already spoken to some of the refugee organizations and they think it’s a great idea.”

Phuket Happy Hotel will be a hotel run on a commercial basis, with paying customers as well.

“If there are guests, there are guests. But I know from running hotels in Phuket since 2005, in the low season there will always be vacant accommodation. It would be great if I could fill my hotels 100 per cent of the time, every night of the year, but I know I can’t. And that is why it is realistic to assume there will be rooms available to offer on a non-paying basis.”

But as any commercial venture, the hotel needs funding to take off.

“The land has been leased and cleared, the plans for the hotel have been drawn up and approved by the local government office. The problem is, if I have to rely on my own funds, it’s going to be a lot slower than if I could get people to help,” explains Simon.

He has begun to collect money for the project on a crowd funding website: Indiegogo.com.

“I have absolutely no shame in asking for donations for building this hotel. I’ve explained what the project is, what my reasons are, who I am and what my financial situation is. I’ve been upfront about that.

“I encourage people to come and visit me and see the construction site. No one likes to donate money to some unseen cause where they know nothing about the person. I’d rather people come and meet me, so I can show them and we can sit down and I can explain more,” he says.

Simon believes that his experience in small hotel management – he has already built four hotels in Phuket – and the generosity of others, will make his dream of a socially-responsible hotel possible.

“If I receive ten dollars from someone, that’s great. Ten dollars buys about seven hundred breeze blocks to build a room. If I receive absolutely nothing at all from anybody, never mind. I’ll go at it at my own pace. Because the project will be built – it’s not something I’ll give up on; it just means I’ll have to work more slowly.

“Even refugees like to forget about their problems for a short while. It’s what I can give. Everyone deserves a holiday.”

For more info on the Phuket Happy Hotel click here.