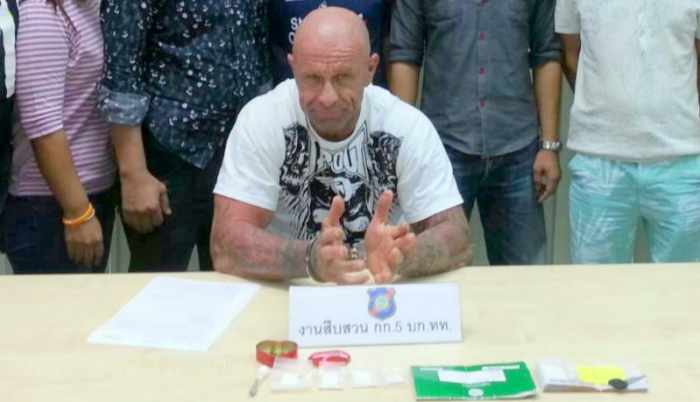 PHUKET: Mark Robert Coutelas, 53, was arrested again for drug possession last night, while the Australian was out on bail waiting for his trial to be heard on previous drug and illegal handgun charges.

Patong Police arrested Mr Coutelas on May 27 after finding him in possession of 530mg of ya ice (crystal methamphetamine), a handgun and ammunition (story here).

Last night, at about 10pm, Tourist Police officers moved in and arrested Mr Coutelas at the Green Mango Apartment complex on Nanai Road, in the same apartment where he was first arrested.

“We got a tip-off that Mr Coutelas was selling ya ice,” Capt Somdej Saraban of Tourist Police told the Phuket Gazette.

“We set up a plainclothes officer to buy some ya ice from him at his apartment, and found him in possession of four packages of the drug with a total weight of 2.45 grams.”

Mr Coutelas was charged with possession of a Category 1 drug with intent to sell.

“He has been handed over to the Patong Police for further prosecution,” Capt Somdet added.

Mr Coutelas made world headlines as the first Australian arrested under martial law was introduced on May 20 (story here), two days before the coup.

Many reports postulated that Mr Coutelas would face court martial.

The Gazette has yet to be informed of any cases in Phuket brought to trial in military court.

All World Cup matches to air live on free TV