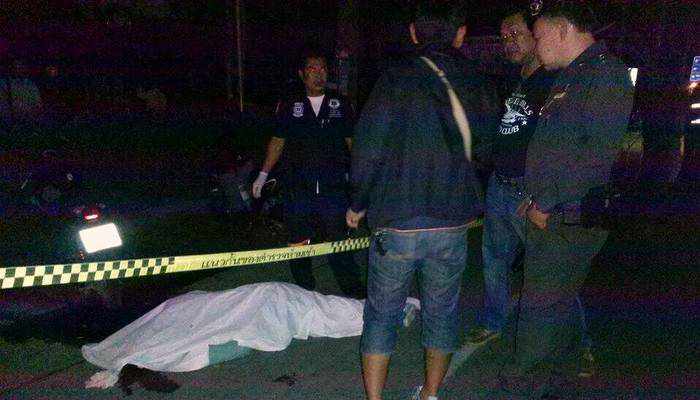 PHUKET: Police have ordered a forensic investigation after finding gunpowder in the car of a police officer suspected of playing a role in a fatal Phuket drive-by shooting in May.

The officer, who police have declined to name, denied any involvement in the incident the morning after the killing (story here).

The gunpowder; the suspect’s private firearm, a 9mm handgun; and ammunition from the victim’s body have been sent to the Police Forensic Science Office in Bangkok for examination.

“We are waiting for the results,” Chalong Police Superintendent Krittapas Dazintharasorn told the Phuket Gazette this afternoon.

Meanwhile, investigators are calculating the trajectory of the bullet to determine where the shot originated, Col Krittapas confirmed.

Nuchsika Klasuek, 35, was shot and killed as she stood in front of the Seraphan Pleng Pub at about 4am on May 16.

The police officer’s white Honda Civic is visible in CCTV images obtained from the area at the time of the shooting. However, the blurry quality of the CCTV images have not yielded much more information, Col Krittapas said.

“We’ve been questioning witnesses, but they are giving us different stories,” said Col Krittapas.

Police have kept Ms Klasuek’s family abreast of developments in the case and explained the investigative process.

“The family understands why the investigation is taking time. They said they can wait,” Col Krittapas said.

While the investigation is ongoing, the officer is still working on the force.

“We don’t have overwhelming evidence against the officer at this point. However, I hope that we will be able to make an arrest soon. Once we do that, we’ll reveal all the details of the investigation,” said Col Krittapas.