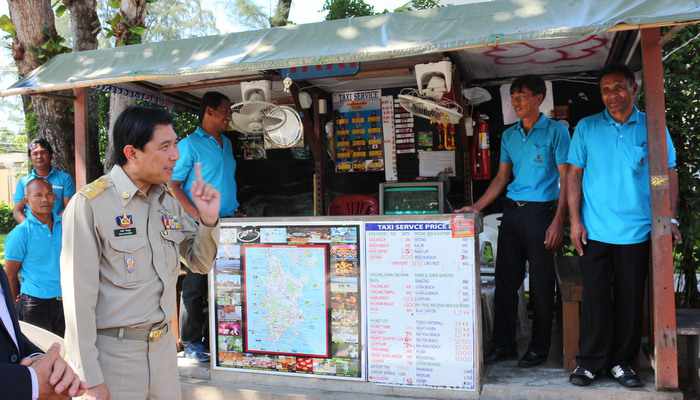 “After we have cleared all illegal taxi booths from Karon and arrested all the people who behave like mafia, it’s time to set up a new plan for public transportation,” said Governor Maitri.

Gov Maitri told the crushed taxi cartel leaders in Kata-Karon on Tuesday that he will take this opportunity to allow the Airport Express Bus to extend its route from Patong, where the service currently terminates, to the southern reaches of Kata Beach.

“Now is the time to expand the airport bus route from Patong to Karon and Kata,” he said.

The owner of Phuket’s Airport Express Bus told the Phuket Gazette today that he was ready to send his buses into Kata-Karon as long as the mafia has been cleared out and there would be no trouble for him, his staff or his customers (story here).

Governor Maitri and other officials at the Tuesday meeting confirmed that the mafia is being weeded out and also described a pilot taxi-overhaul project to be initiated in Kata-Karon.

“I want to raise the island’s taxi services up to an international level,” said Gov Maitri. “If our work in Kata-Karon is successful, I want it to be a model for all other areas on the island.”

The governor said that a team will be set up to work directly with drivers who are out of work as a result of the taxi cleanup.

“We need to change the attitude [of taxi drivers] so they can start looking for other jobs,” he said. “We will council them on what their job options are, and officials will even provide training, if needed.”

Karon Police Superintendent Nathapakin Kwanchaipruek highlighted what has already been done to improve the taxi situation in the popular beach town, pointing out that of the original 54 taxi booths, 36 built on public land had been destroyed.

Col Nathapakin pushed for the new model to resemble Kata Noi’s Community Service Taxi. The taxi drivers at that station have matching uniforms and operate on fixed rates, he said (story here).

“There will be about 20-30 taxi stands throughout the town with signs detailing rates for customers. Each one will have to be a minimum of 200 meters away from the other,” said Chief Terayout.

“Each queue will only have 2-3 spots in which taxis can park. We will set up a place nearby where standby taxis can wait for customers.”

Gov Maitri appointed officers at the meeting to determine the location of the new stands and report back to him at a future meeting, the date of which has yet to be set.