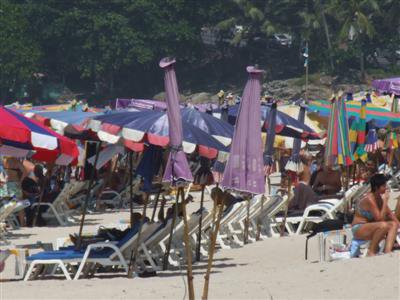 The four working groups were set up by then-Governor Niran Kalayanamit in 2007 as a way of imposing order at island beaches, which attract a wide variety of vendors hoping to sell goods and services to visiting tourists.

The first working group is responsible for the Muang District beaches of Rawai, Kata, Karon and Yanui.

The second is responsible for Patong, Kamala and Laem Sing beaches in Kathu District.

The third was assigned responsibility for Nai Yang, Bangtao and Surin beaches in Thalang District.

Each of these working groups is chaired by a deputy governor.

At the meeting held on January 9, Gov Preecha said he was dissatisfied with the current state of affairs at beaches in all three districts.

“These working groups were set up two years ago, yet the beaches remain in a state of untidiness and disarray. I am aware that the four working groups have not been meeting to find ways to address these issues. I have had complaints from tourists about pollution from food vendors and a lack free space on beaches because of the number of recliners set up there,” said Gov Preecha.

As a way of spurring the groups into action, he ordered all four to submit monthly progress reports directly to him.

The governor, who hails from the landlocked province of Phichit, seems to be aware of the scale of the challenge, however.

“A friend of mine told me cleaning up the beaches would be a very difficult task and that it would probably take another tsunami wave like the one in 2004 to actually achieve it,” he said.

“However, this is an issue that concerns and affects the lives of many people. I am confident that these working groups can make some headway,” he said.