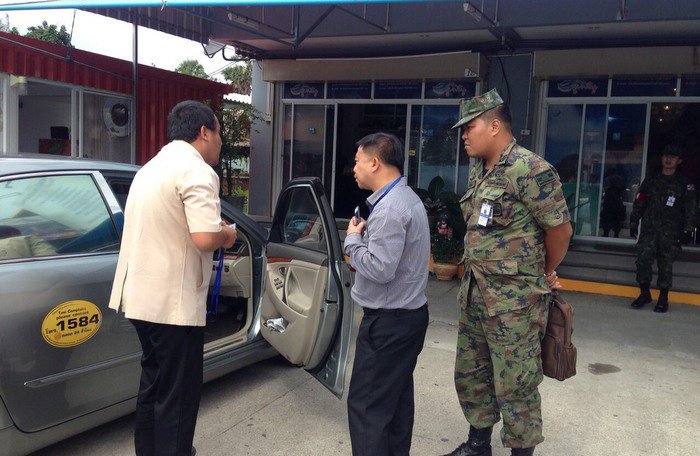 Montira Sakorn’s Facebook post alleged that the taxi she hired from the airport to Patong failed to bring her and her boyfriend to their destination. Instead, it left them waiting at the taxi company’s building in Thalang for an undisclosed amount of time.

The driver supposedly told them that he had to sign in at the company. However, when the taxi driver didn’t come back, Ms Montira called the police who instructed her to take photos of the licence plate number, get details of the taxi company and hire a tuk-tuk to get them to their destination, even though they had already paid for the taxi service.

Government officers took quick action after learning of the incident, holding a meeting with Santi Pawai, director of the Ministry of Tourism and Sports (MOTS) Phuket Office; Chanuchan Cholsuwat, the superintendent of the Thalang Police; and Jaturong Kaewkasi, the chief policy adviser from the Phuket Land Transport Office (PLTO).

“It’s things like this that can ruin the reputation of Phuket,” Governor Chamroen said.

The taxi driver, Muhammad Arobee Mooshor, an employee of the Airport Limousine and Business Service Cooperative Co Ltd, was also asked to join the meeting.

“According to Mr Muhammad, the customers paid for their taxi at the Infinity Tour service counter at the airport,” Mr Jarutong said. “He said that he wasn’t sure of how to get to the destination, so he stopped by the company’s building in Thalang to ask for directions. However, when he returned the customers were gone.”

MOTS and PLTO officers are currently in the process of investigating both the Infinity Tour Company and the Airport Limousine and Business Service Cooperative Co Ltd to clarify the problem, as both parties have different accounts of the incident.

Regardless, Mr Jarturong fined Mr Muhammad 1,000 baht and suspended his licence for one month for failing to bring his passengers to their final destination.

“We will wait for officers to uncover the truth. If they find that the passenger’s claim is true, we will order the company to fire Mr Muhammad. However, if we find that the company was also involved, they too will face legal action,” Gov Chamroen said.