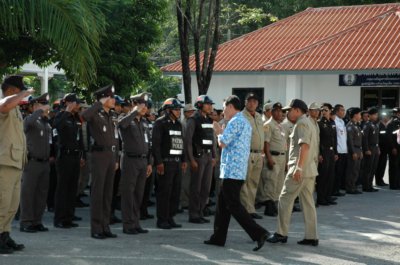 PHUKET: Phuket Governor Wichai Phraisa-ngop has assigned three of his vice-governors to oversee checkpoint inspections on the island during the Songkran holiday period.

Gov Wichai made the announcement outside Phuket Provincial Hall yesterday.

Particular emphasis will be placed on checking for drink driving, Gov Wichai said.

The authorities will also crack down on boat safety, with checks to ensure that vessels are not overloaded and that they are fitted with enough life-saving equipment.

In the event of an emergency, divers could be deployed to any location within half an hour, Pol Col Anant added.