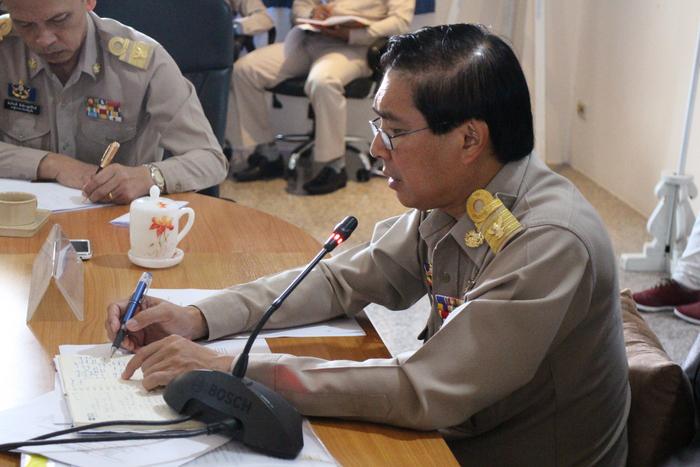 PHUKET: Governor Maitri Inthusut requested that Phuket be given a flexible curfew as it is a tourist destination, he told a meeting of more than 100 high-ranking government officers today.

He made the request at yesterday’s briefing of governors and police chiefs at the Royal Thai Army Fourth Area Command in Nakhon Sri Thammarat (story here).

While he did not receive a response to his request, he was optimistic.

“I think flexibility for tourism areas may happen soon,” he said.

At yesterday’s briefing, Governor Maitri was told to disseminate information about the 22 announcements issued up to that point by the National Peace and Order Maintaining Council (NPOMC), the governing body under the coup.

There are strict restrictions on political activity, the governor stressed.

“Gatherings of more than five people for political purposes is prohibited. Government officers are not allowed to discuss political opinions with the media, and any seminar or meeting with political content must be cancelled,” he said.

“However, gatherings such as events or exhibitions can still be held, but they must finish before the curfew starts,” Gov Maitri said.

During the curfew, only those people who are exempt (story here) are allowed on the streets between 10pm and 5am.

Nevertheless, tourists are free to enjoy nightlife at the hotel or resort where they are staying, confirmed Patong Police chief Chiraphat Pochanaphan.

“They are free to use the restaurants and bars in their hotels, they just can’t go out after the curfew starts,” Col Chiraphat said.

Normally vibrant Patong was quiet again last night as the 10pm to 5am lockdown extended to a second day.

“We had police patrols go out last night, but no arrests were made. People are obeying the curfew,” the colonel said.

Shopkeepers may keep their businesses open past 10pm as long as they do not go outside, noted Phuket Provincial Deputy Commander Peerayuth Karajedee.

“If you stay in your place, it’s fine. Noodle shops or boiled rice restaurants can stay open, as long as the staff stay at the shop after curfew,” he explained.