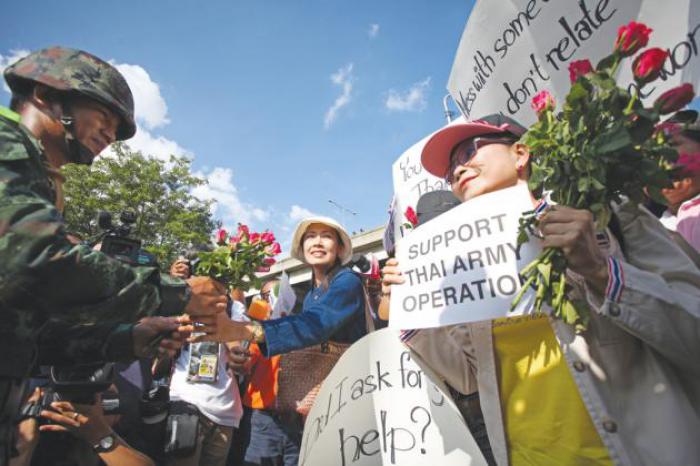 Capital creeps back to life
The Nation / Phuket Gazette

PHUKET: An uneasy calm settled over Bangkok yesterday as one of the world’s most vibrant cities crept back to life after a night-time curfew imposed by the military.

The capital’s usual morning gridlock was relieved as schools were shuttered following an Army order, but many people returned to work as normal, stopping at food stalls which opened following the end of the curfew at 5am.

In contrast to the last coup in 2006, there were no tanks on the streets and only a limited deployment of soldiers at key buildings.

Senior politicians who were ordered to report to the military have felt the direct impact. But for the public, the curfew was met with humour and stoicism in a city whose recent history has been pockmarked by political unrest.

For Thanakan Chalaemprasead the most distressing aspects of the coup so far are the loss of his favourite TV shows – after the Army ordered the suspension of normal programming – and the early closure of the city’s ubiquitous 7-Eleven stores.

“I was hungry, but I only had instant noodles at home,” the 21-year-old mechanic said. “There was also nothing on TV. If the Army wants us to stay home, they should at least let us watch something.”

Instead, TVs and radios blared patriotic music punctuated by statements from a military spokesman.

Overnight the commercial heart of the city, famed for its 24-hour beat, was reduced to a near ghost town, with only the occasional taxi plying the roads as the curfew descended. A smattering of bars breached the order serving beers to bemused tourists, who were holed up in their hotels.

But there were few direct signs of military intervention, after a dramatic day of Army deployments and televised orders threatening further curbs on media and personal freedoms – including a ban on political gatherings of more than five people.

As dawn broke yesterday armed troops were seen around Government House overseeing a clean up after protesters were dispersed from their sandbagged encampment.

Reporters also saw Army officers giving alms to Buddhist monks outside a nearby temple, as a bulldozer removed sand-bags and concrete blocks from the vacated protest site.

After months of disruptive political rallies, some city residents expressed optimism that the coup would cut a path through the political paralysis, which has seen at least 28 people killed and hundreds more wounded in protest-linked clashes.

“At first I thought the coup was a bad idea,” Vichit Kriyasaun, 27, said. “But now I think it could be good because they may stop the fighting.”

However, others were wearied by the latest chapter in a festering crisis that has torn Thailand apart since 2006, when former PM Thaksin Shinawatra was ousted. The curfew will remain in place nationwide until the Army says otherwise.

PHUKET: The last groups of protesters from both sides of the political divide left their rally sites yesterday, as police and soldiers were sent to dismantle their barricades, bunkers and makeshift camps.

Protesters were transported on military buses to the Southern Bus Terminus and the Hua Lamphong Railway Station.

The operation began at about 5.30am on Rajdamnoen Avenue, where the protest sites of the anti-government People’s Democratic Reform Committee and the Student and People Network for Thailand’s Reform were located.

More than 200 policemen and soldiers, helped by cleaners and street sweepers from the Bangkok Metropolitan Administration, cleared and cleaned the sites near Government House.

Two military trucks and an excavator were also used in the operation.

Barbed-wire fences and piles of tyres were removed, as the last group of anti-government protesters were packing their belongings at the protest site near Makkhawan Rangsan Bridge.

A number of weapons were discovered by soldiers searching the protest site, including a tear-gas launcher, teargas canisters, imitation shotguns, bulletproof vests, and teargas masks. The objects were handed over to police.

Roads around the three protest sites remained closed to traffic yesterday, with the roads to be reopened once the authorities were sure the sites were safe. Officers from bomb disposal units scanned the sites for possible explosives.

There were no reports of injuries or deaths at the rally site of the pro-government red shirts on Aksa Road after soldiers dispersed their demonstration on Thursday evening, according to Dr Kongdej Leethochavalit, a senior public health official in Nakhon Pathom where ousted government supporters had gathered.

There was only little resistance to the military, with sporadic gunshots reported.

In a related development, seven home-made bombs were found inside a men’s toilet at a petrol station on Lan Luang Road yesterday morning. The bombs were wrapped in black tape and hidden inside a garbage bin.

PHUKET: Military junta chief General Prayuth Chan-ocha yesterday pushed forward a reform agenda and made the payment of debts to farmers under the rice-pledging scheme a top priority after Thursday’s coup, which he called a sacrifice for the nation to build unity and end conflicts.

The monarchy has nothing to do with the seizure of power, Prayuth was quoted as saying to officers at a meeting of the junta’s National Peace and Order Maintaining Council (NPOMC) yesterday.

The NPOMC began to formulate an action plan to bring the country back to normalcy. Prayuth told yesterday’s meeting of agency heads that funds have been allocated to repay debts owed to rice farmers under the ousted government’s rice-pledging scheme. He expressed confidence that within 15-20 days the debts should be repaid.

Priority has been given to hunting down people the junta considers its opponents.

More than 100 people, including former PM Yingluck Shinawatra, were summoned before the junta yesterday. Many people such as former education minister Chaturon Chaisang however refused to comply, saying they disagreed with the coup and had done nothing wrong.

The military believes underground movements would soon surface to oppose the coup. The previous junta of the 2006 coup faced severe resistance from armed groups.

An anti-coup group yesterday confronted the military near Bangkok Art Centre in Pathumwan.

The second task in the plan outlined yesterday was to enhance Thailand’s image internationally by inviting diplomatic corps based in Thailand to explain the reasons for the coup.

Diplomats and representatives from 58 countries attended the meeting, but ambassadors of major embassies in the capital, such as US Ambassador Kristie Kenney and German Ambassador Rolf Schulze, did not attend.

Kenney told the media that she was busy with another engagement. Schulze said that he did not want to be involved in the activities of the Thai military. Many other embassies also did not